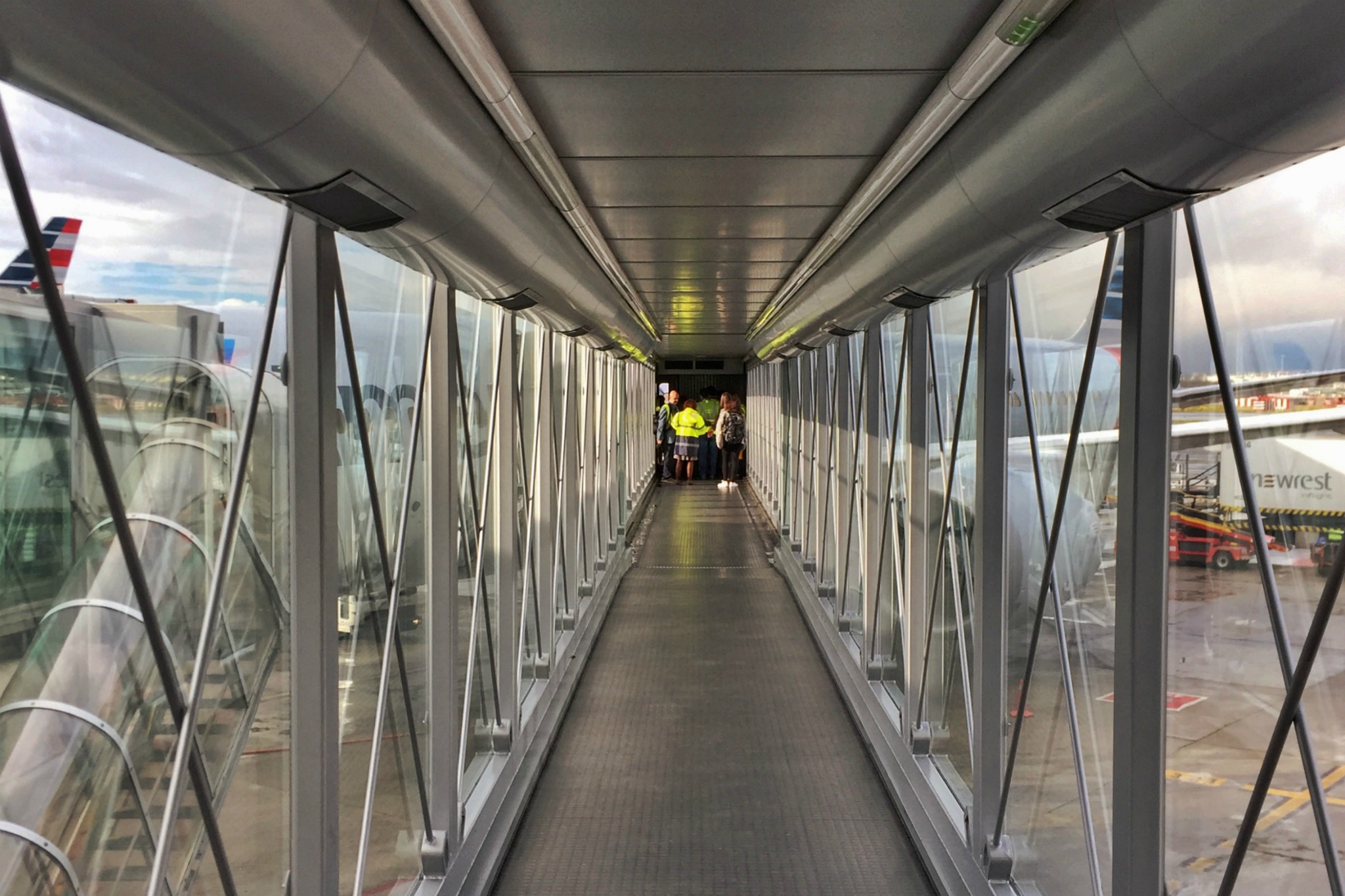 After the fanfare of American Airlines’ first official 787-9 flight domestically from DFW to LAX, it was time for American to take 787-9 for the long haul. I had booked my ticket well in advance in anticipation of the launch of American Airlines’ 787-9 Premium Economy product. Plus, I love Madrid and I’m happy to visit any time!

American is currently offering Premium Economy seats complimentary to elite members (Executive Platinum and Platinum at booking) and are being sold as standard Economy tickets. Until April 2, 2017, these seats will appear just like Main Cabin Extra on the seat map. Come April 2, 2017, these seats will be sold as their own fare class. While the long haul soft product with enhanced amenities and meal service launched on November 4, 2016, the “official” launch date for Premium Economy is April 2, 2017.

I arrived at DFW about 90 minutes before departure and after contemplating which lounge to use, I decided to head to the Amex Centurion Lounge. After grabbing a few bites to eat, I checked my flight status and realized I had failed to double check my departure gate which had originally been in Terminal D, very close to the Amex Centurion Lounge. My departure gate had been moved to A23 in Terminal A and I had about 15 minutes until boarding. I darted for the Skyline and made great time to Terminal A. I made it to the gate just about 3 minutes before boarding commenced.

I’m not sure why this gate was utilized for such a large plane as the 787-9 but it was quite the chaos. There was a huge mob of people in a very small area, pouring into the main concourse walkway. I am uncertain how AA will handle the boarding protocol for Premium Economy when it goes “official” but I boarded after Business Class as an Executive Platinum. But once I made my way down the jet bridge, boarding was very smooth.

We boarded through door 2L and were greeted by a senior crew member. The inaugural 787-9 flight from DFW to LAX was full of avgeeks and bloggers but this flight was a bit more muted. There were a few travel enthusiasts on board like myself but overall this a fairly typical flight in terms of passengers.

I had selected a bulkhead window seat, 9A, on this flight. The first thing I noticed on my seat was the upgraded amenity “bundle” that signaled the enhanced soft product and meals were going to be a part of this flight. There was a bag with a premium blanket, standard pillow, small red amenity kit, and “noise-reducing” headphones.

We were scheduled to to depart at 5:45 pm from DFW but there was an issue with the cargo hold door. Ultimately we departed over an hour late, close to 6:50 PM. We quickly taxied and were soon up in the air. Drink service along with a snack was stared about 30 minutes after we reached cruising altitude. In Premium Economy the initial snack was the same as Economy: Plastic cup drinks and a bag of pretzels.

The purser on board was still instructing some of the crew on the service and meal protocol for Premium Economy so dinner service appeared to be running a tad behind. Meal tray carts were rolled out but printed menus had not been provided. We were then offered a choice of “beef” or “tomato pasta” and I opted for the beef. The tray was pulled together on the cart and served on a single tray. Food is served on ceramic dishes, similar to Business Class. Glassware was provided for wine and spirits but when offered wine, I was handed a plastic cup of wine. I’m capable so I poured it into my glass.

The “beef” was a steak served on a bed of quinoa and asparagus. There was a garden salad as well as shrimp served over slaw. There was a bread roll and a lemon desert. The beef steak was actually cooked decently. Beef is often overcooked with in-flight catering but this one wasn’t half bad. Just about everything was tasty and the presentation was respectable.

Meal trays were collected about 30 minutes later but unfortunately drink refills were not offered so I found that a bit disappointing. I played with the IFE for a bit which is fairly standard for all of AA’s newer planes. While I did not watch any movies but there was a good selection of live TV and movies. But I did leave the flight map up for some time. About 30 minutes after trays ha been collected, water bottles and snack mix were passed out.

At this point I reclined my seat up a bit and pulled out the leg rest which is nice and comfortable. My only other Premium Economy experience at this point had been with JAL and I found AA’s leg rest to be much more comfortable and sturdy than JAL’s. Keep in mind the bulkhead row (Row 9) has leg rests while Rows 10 and 11 have foot rests. Both are adjustable and comfortable in their own right. I am 5’10” and had plenty of leg room in the bulkhead. My seat neighbor was about 6′ tall and he seemed comfortable as well.

I stayed up for quite some time catching up on some work and spent a good amount of time on the in-flight WiFi which is provided via Panasonic. The WiFi was decent although there was a short time where it went down over Canada. I do think AA’s international WiFi is reasonably priced at $19 for the entire 9.5 hour flight.

Over the Atlantic at some point, I dozed off to get about 2.5 hours of sleep. While this is no lie-flat seat, I found sleeping comfort to be much greater than that of standard Economy. The extra recline of the seat, extra width, roomier headrest, and leg rest certainly all contributed to the comfort. The amenity kit was a nice addition but not as nice as what you would receive in a Business Class. The blanket was quite nice though and I though it was cute that it matched both the pillow and the amenity kit. The noise-reducing headphones were reasonably comfortable.

About 90 minutes out of Madrid, I started to wake up from the smell of warm bread. I have rarely had an amazing in-flight breakfast, even in Business Class (Virgin Atlantic Upper Class is a great exception). The Premium Economy breakfast was a warmed pastry, Chobani yogurt, and a fruit plate served on ceramic dishes. I’m not convinced the Business Class breakfast was a whole lot better. It was simple but I wasn’t too hungry that early in the morning. Coffee and tea were offered but the crew mixed up the coffee and tea pots. Oops.

About 20 minutes later, breakfast trays were collected and the cabin crew started to prepare for landing. We had a nice scenic approach into Madrid and were soon on the ground. We taxied to Terminal 4S and to my excitement, were greeted with a water cannon salute as we approached our gate. I was just sad I wasn’t prepared to snap a good photo of the water cannons!

Once on the ground, everyone deplaned but I stuck behind to snap a few last photos and chatted briefly with the crew. Overall, I thought the service was good and the crew was upbeat. But you could tell they were still in training on the new Premium Economy product. While there were a few minor service hiccups like no menus, the drink mix-ups, and the lavatory confusion, I could mostly overlook the small negatives. The overall picture for me was bright. The crew even took my picture for me!

With this flight being the launch of AA’s 787-9 Premium Economy long haul product, I overall walked away impressed. I’ve seen many comments that the seat isn’t groundbreaking but for a legacy American carrier, this is a huge step forward in the passenger experience. AA went for a quality seat with thoughtful features that will last for a while. I think AA is offering a great upgraded experience for the passenger who wants an upgrade over standard Economy but can’t or doesn’t want to splurge on Business Class.

I know I arrived well-rested in Madrid and left with a good impression of American’s 787-9 and the Premium Economy cabin. The 787-9 is a comfortable aircraft and a very welcome addition to the American fleet.

Are you excited to try Premium Economy? Stayed tune for my upcoming report on my return journey on the same aircraft.