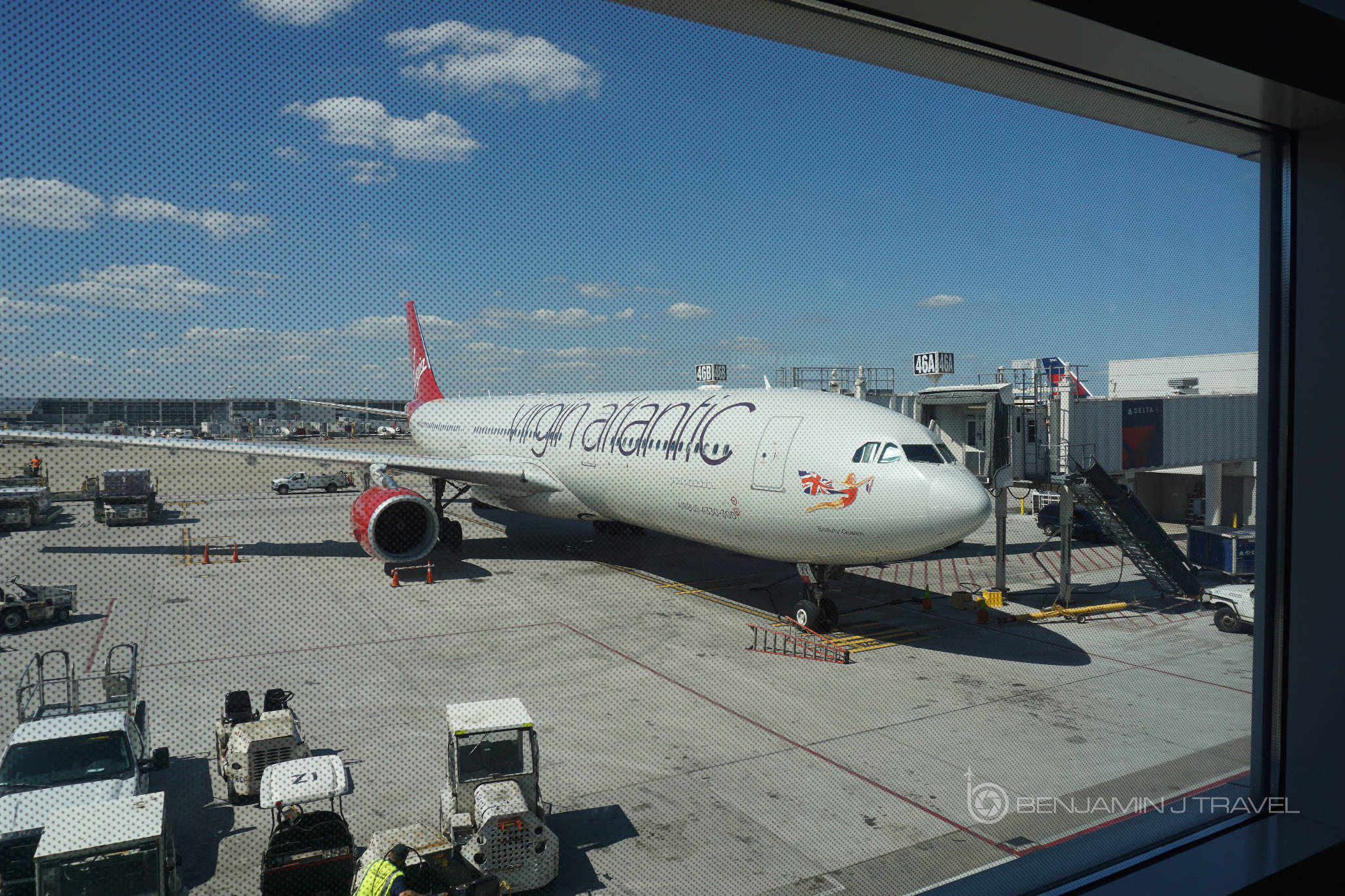 With high expectations of the Virgin Atlantic’s A330 Upper Class product, I was awaiting this trip for the last six months. Our Virgin Atlantic flight was part of a greater itinerary that ultimately took us to Greece and Italy.

Unfortunately Virgin Atlantic doesn’t fly to Dallas so we took a Delta flight from Dallas to Detroit which we were able to wrap into a single award booking. We redeemed 62,500 Delta SkyMiles for each of us one-way for the total booking Dallas to London. I can go ahead and spoil the story and let you know that there’s no comparison flying a Delta CR9 regional jet to a Virgin Atlantic’s A330 Upper Class!

We arrived in Detroit with about a 2.5 hour connection so we had plenty of lounge time. Sadly, Virgin Atlantic does not operate their own lounge in Detroit so Virgin Atlantic premium passengers can utilize the Delta Sky Club. Delta has been making continuous improvements to their Sky Clubs but the Detroit Sky Club leaves a bit to be desired. There are multiple Sky Clubs in Detroit but we utilized the mid-concourse lounge in Terminal A, the largest at DTW.

The lounge is quite large with the check-in desk on the lower level and escalators taking guests to the lounge on the upper level. The lounge is large and spacious and while I’m sure this lounge gets very crowded from time to time, it wasn’t too bad on our visit. The decor could definitely be resurrected from the early 2000’s and the food selection was unappealing.

About 15 minutes before boarding time, we decided to head to out gate which was very close to the Sky Club. There were a few empty seats in both Premium Economy and Upper Class so the gate agents were making announcements that these upgrades were available for purchase. It’s been a while since I’ve heard upgrades for sale at a boarding gate. Boarding started right on schedule and after pre-boarding, we boarded when Upper Class was called. We headed down the jet bridge and turned left on board. The Upper Class cabin would ultimately be full but it took quite some time for the cabin to fill up.

I took time to snap a few quick photos and pre-departure beverages were ordered. Orange juice and champagne was offered and I obliged a glass of champagne. Dinner and breakfast menus were on our seat and I took time to browse the menu. The crew took time to introduce themselves and in our aisle of the cabin, we had a very friendly male and female flight attendant.

The seats in Upper Class on the A330 are bit narrower than average for Business Class. I’m a fairly thin guy so for me I didn’t really have any issues with the space. But I could see that some folks may feel a little constrained in this seat configuration. In its upright position, the seat is already slightly reclined  for comfort. Privacy is decent, even with the translucent dividers. Comfort aside, the seats do look cool and the mood lighting on board creates a combination of high-style looks.

Shortly before the door was closed, pajamas were offered to passengers in Upper Class. Virgin Atlantic is one of only a few airlines that offer pajamas in Business Class. The flight is under 7 hours so our dinner orders and breakfast orders were taken the ground. Virgin Atlantic allows you to build a custom breakfast on an order card which I think is pretty cool. I check almost every box on the menu! For my dinner order I selected the following:

Shortly after we reached cruising altitude, beverage service followed and I started with a glass of Sauvignon Blanc. Crisps (or chips if you like) were served with beverages. Shortly followed were the starters. The soup was very good. Next, the salmon filet with broccoli. The presentation was not only great but the taste was excellent. The broccoli was even cooked to the right firmness!

Dessert soon followed and I switched to champagne for the heck of it. I devoured the chocolate chip cheesecake. And as if that wasn’t enough, the purser insisted that I also have the cheese and biscuits which I obliged. This was a nice cap-off to the meal, even if I was incredibly full.

Since the on-board bar in Upper Class is a key feature of Virgin Atlantic, we decided it’d be nice to spend met time over there. We chatted up with the friendly male flight attendant from our aisle and browsed the snack selection. I’m not really a gin drinker but for some reason I opted to order a gin and tonic. We sipped on our drinks while chatting about travel experiences with some of our fellow passengers. After about 20 minutes at the bar however, there was a bit of turbulence so we had to return to our seats.

Since the flight time is sub-seven hours, I figured it was time to head to bed anyways. I started to try to determine how to flatten my seat to a bed but I couldn’t figure it out, Our flight attendant came by and kindly let me know the seat has to be manually folded over. She then made the bed for me and flattened the seat. And while I found the bed to be decently comfortable, I didn’t like the fact that the seat has to be manually folded by the crew. I appreciate the assistance but it’s kind of nice to just push a button to flatten your seat to a bed.

I took time to put away a few of my personal items in my carry-on as there isn’t a ton of storage on the sides of the Upper Class seat. I cozied up under the duvet and dozed off for about 2.5 hours. I had requested to be awoken for breakfast but the sounds of breakfast service starting to brought me to wake. Breakfast was served rather promptly as our custom orders had already been prepared along with coffee at my request.The breakfast was all very good, including nice presentation. The breakfast was a bit large for me to finish at all but that’s mostly due to my body being on US Central time. Breakfast trays were taken as soon as finished but certainly didn’t feel rushed.

About 30 minutes after breakfast service finished, we were approaching London Heathrow. As usual, there was a bit of a holding pattern. We made three loops over the London area before finally being able to approach for landing. Only a few minutes behind schedule, we landed at Heathrow and taxied to Terminal 3, home terminal of Virgin Atlantic.

We deplaned and the crew graciously thanked us for our business and wished us well on our journey. We were continuing on to Santorini via British Airways so we had to clear UK customs  to collect and re-check our bags. After clearing customs and collecting our bags, we headed over to the Virgin Atlantic Arrivals Lounge, directly outside the baggage claim in the arrivals area.

Overall, I was very pleased with our experience with Virgin Atlantic’s A330 Upper Class. The soft product and customer service were well above my expectations. The food was one of my best experiences in Business Class. The hard product (or seat) was about average in terms of comfort, storage, and privacy. It’s not my favorite seat in the sky, but I was overall comfortable and by no means would I avoid Virgin Atlantic due to the seat. I only wish we had more than ~7 hours to enjoy this flight.