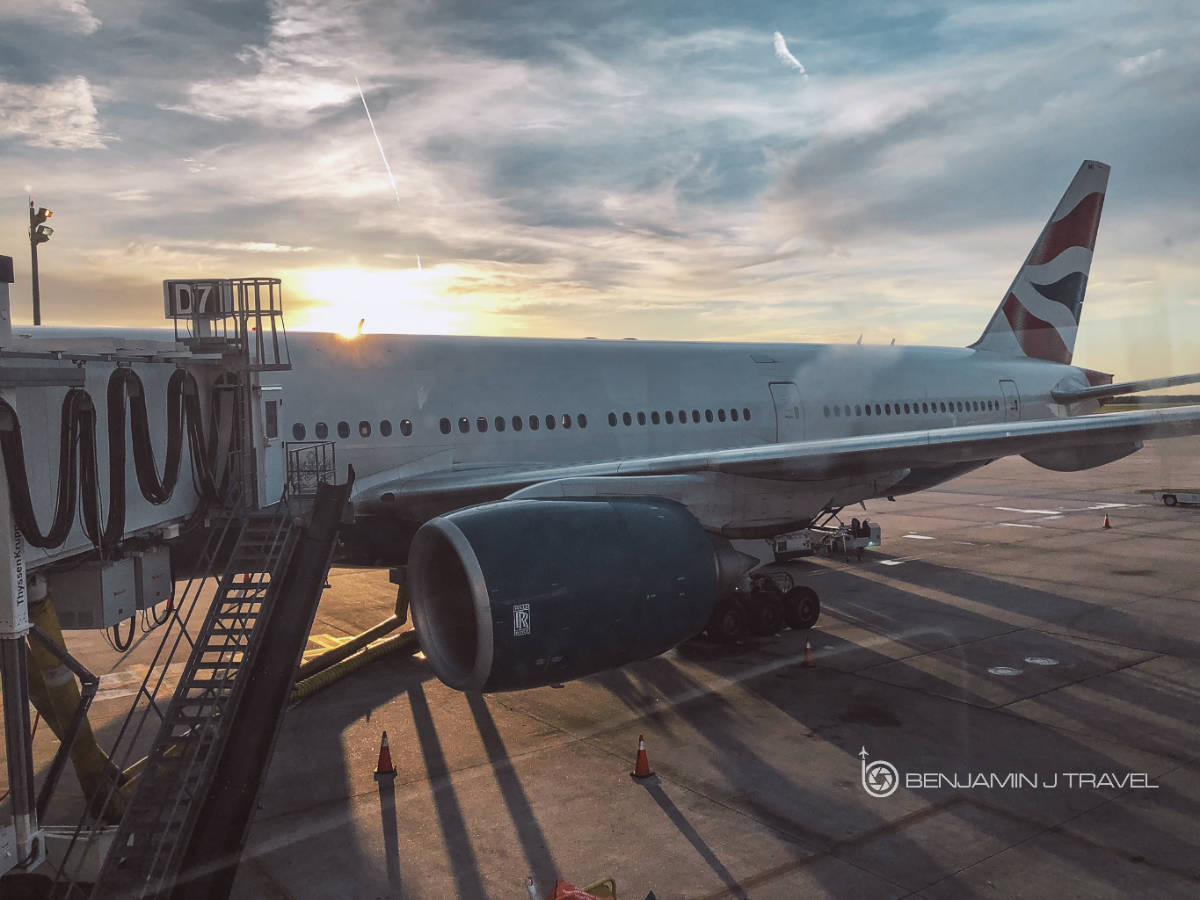 The Cabin: Configured in a four-class arrangement (First, Club World, World Traveller Plus, World Traveller) our 777-200 had 40 recliner seats in a 2-4-2 layout. I was seated in the Premium Economy bulkhead row in the aisle seat: 21J. In the bulkhead row in a window seat, there is enough room to get to the lavatory without distributing your neighbor.

The Seat: In Premium Economy on the 777-200, British Airways has recliner style seats, upholstered in an atrocious blue fabric. Each set has a foot rest that extends with the seat controls and a more generous recline than a standard Economy class seat. It’s in similar in space to American Airlines’ Premium Economy seat but a lot more dated.

The Amenities: In Premium Economy, a “blanket bundle” is placed at every seat with a blanket, pillow, headphones, ear plugs, and eye mask. The amenity kit is rather bare bones in a disposable container. Delta offers a similar kit in Economy Class on it’s long haul flights. There is a very dated IFE screen at each seat and I had a hard time seeing the screen at times unless the cabin lights were dimmed. The IFE controls are also very cumbersome to use. There is no WiFi on board the 777-200, just like the vast majority of the British Airways fleet.

The Food: I had pre-ordered the Spicy Vegetarian meal so my meal was brought out first. The meal had decent presentation and tasted fairly good. The best part was the Gulab Jamun dessert. British Airways consistently offers terrible pre-landing meals and this flight was no exception. As you can see in the photos, breakfast wasn’t exactly exciting. The pre-packaged bagel sandwich was edible and the granola bar fell apart as soon as opened the package.

The Service: Pre-departure beverages were offered during boarding: orange juice or water. The crew was polite and friendly. During the pre-meal service and dinner, multiple drink refills were offered.

British Airways truly needs a modernization of its cabin interior across the entire fleet. The hard product in Premium Economy is truly disappointing on anything but the newest aircraft. One can only hope for an exceptional crew to help make the experience more enjoyable.