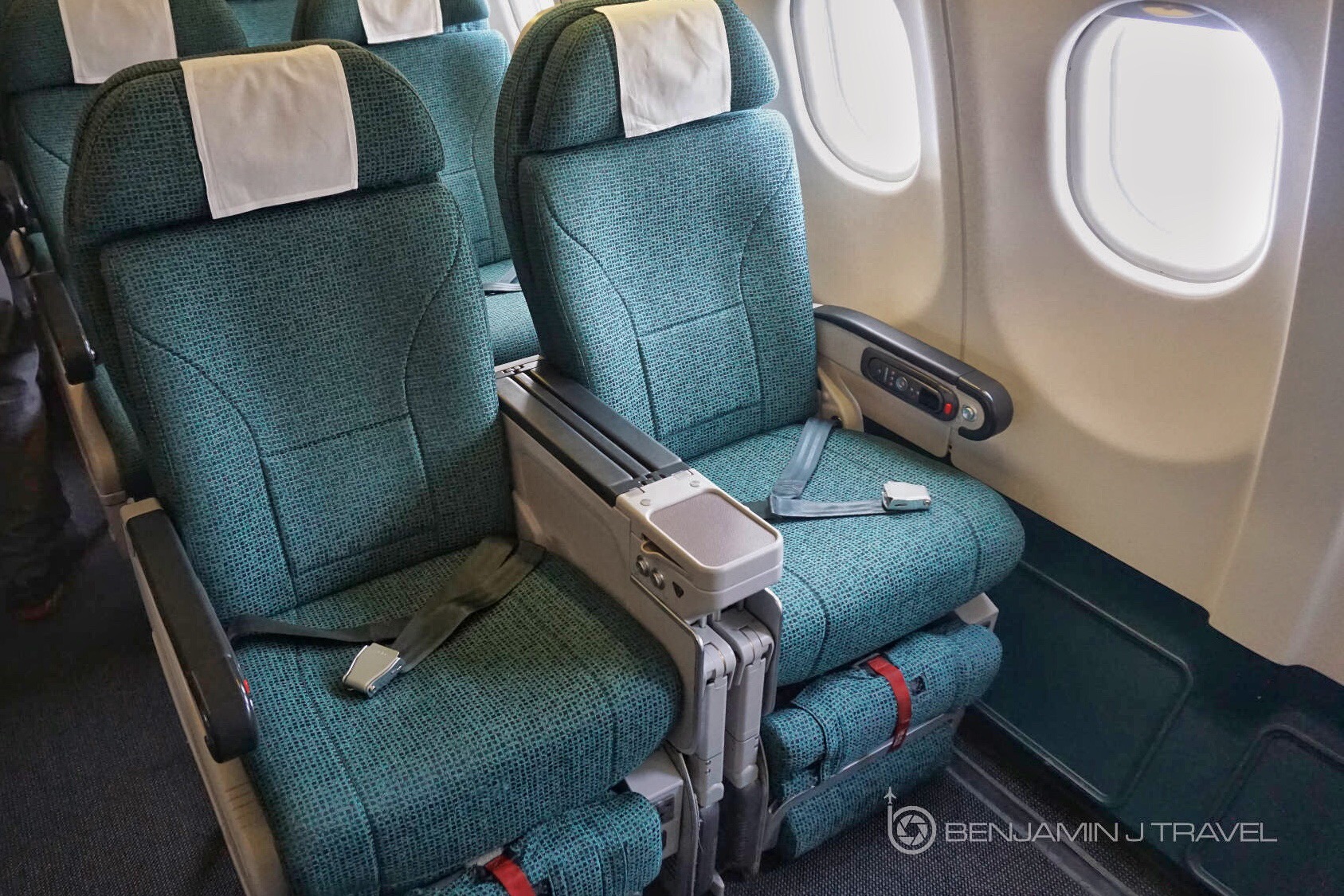 Bound for Singapore on my final leg of my outbound journey, I was booked in Cathay Pacific A330 Premium Economy. It’s about a 3.5 hour journey to Singapore from Hong Kong but this aircraft was configured in a long-haul configuration. My last  intra-Asia flight on Cathay Pacific was on the regional two-class version of the 777.

I savored as much time as possible at The Pier First Class Lounge as long as possible before hiking over the Gate 27 for boarding. Boarding had started as I arrived at the gate, just in time to catch the end of Priority boarding. After a quick passport check, I was on my down the jet bridge to our A330 ride. We boarded through Door 2L, which puts you between the two Business Class sections.

The Premium Economy cabin on the A330 is even smaller than that on the 777-300ER. There are only 3 rows of seats in a 2-3-2 configuration, giving a very intimate feel. I was one of the first passengers in the Premium Economy section so I had plenty of time to settle my bag and snap a few photos.The cabin ultimately was completely full but not until the cabin door had been closed. A few elite passengers from Economy had been upgrade last minute from the main Economy cabin. Pre-departure beverages were served with a choice of water or orange juice.

I was seated in 30A, which is the window seat on the left hand side pair of two seats. This is a bulkhead seat with ample legroom. The Cathay Pacific A330 Premium Economy seat is identical to that on the 777-300ER. But unlike the 777-300ER, there is not a separate lavatory for the Premium Economy cabin. The lavatory for Premium Economy is located in the main Economy cabin. There is a fully extending leg rest with a foot rest that also folds out optionally. The seat reclines more than the standard Economy seat and has extra width. The bulkhead seats on the A330 had IFE screens that fold between the seats and must be stowed for takeoff and landing.

We had a bit of a long taxi and wait for departure clearance due to the heavy air traffic at Hong Kong. But soon we were on our way, just a hair past schedule. Shortly after we reached our cruising altitude, the flight’s purser, Rachel, came by to introduce herself and thanked me for being a OneWorld Emerald. I was a bit jet lagged so mt body felt as if it was in the late afternoon so I had expected a lunch service. But since we were departing from Hong Kong before 10 AM, breakfast was to be served on this flight.

Paper menus were not distributed on this flight. There was a choice of an omelette with pork sausage or a chicken congee porridge with mushrooms. I opted for the congee although I wasn’t certain what it was. The presentation was very unexciting but it was actually tasty. But compared to some of the other Cathay Pacific meals on this trip (lounge or in-air), it wasn’t much to rave about. Beverages were offered with the meal and once again after the meal trays were collected. On shorter intra-Asia flights, the meal presentation is a bit simpler in Premium Economy than on long-haul flights. The service on this flight was polite but not particularly memorable.

There is no WiFi on Cathay Pacific’s A330 so I spent a bit of time on my laptop but spent most of my down time watching a move on the IFE. Cathay’s IFE software, Studio CX, is one of the easiest to navigate. My only dislike is the lack of options or settings on the flight map tool. The movie selection is quite good with mix of Western and Asian movie options. There are both USB and AC power ports at every seat in Premium Economy. Noise-cancelling headphones are also provided in Premium Economy.

About 20 minutes from arrival, we began our descent into Singapore. One minor downside to bulkhead seats with folding IFE screens is the requirement to stow them away on final approach. I had to cut my movie short before landing. We had a scenic approach into Singapore over the harbor and Downtown core and were soon on the ground. Our taxi was a bit long but we eventually parked at our jet bridge in Terminal 1.

Overall, for a ~3.5 hour flight, Cathay’s Premium Economy cabin is just the right amount of comfort to get from Hong Kong to Singapore. While it wasn’t the best service I’ve received from Cathay Pacific, it was overall a friendly crew. I always appreciate the acknowledgement Cathay Pacific of elite customers on nearly every flight. And even these older A330s in the Cathay Pacific fleet provide a nice level of comfort.