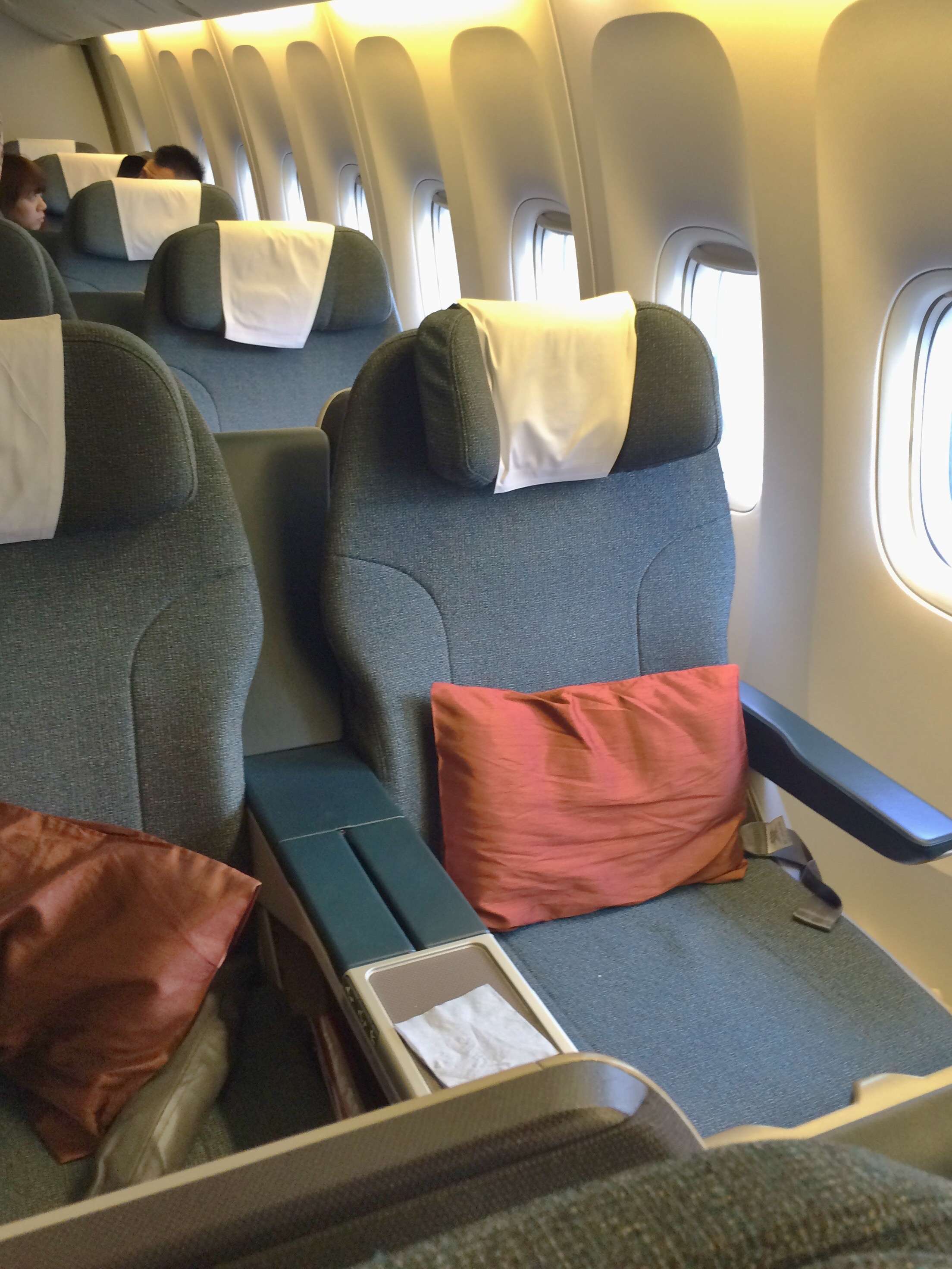 On a recent trip to Hong Kong, we took a side trip to Taipei, redeeming 36,000 Avios and roughly $70 in taxes for round-trip Business Class on Cathay Pacific for two of us. This was one of my best redemptions

using Avios on partner travel. This redemption is within Zone 1 of the BA award chart so it should remain intact with the negative changes to Avios redemptions recently.

While the flight is just under 2 hours from Hong Kong to Taipei, you can look forward to a robust Cathay Pacific experience. We arrived quite early to HKG to spend some time in the lounge. Since we were at Gate 31, we opted for The Bridge lounge near Gate 35. We’d intended to visit The Wing but got didn’t get around to it. The entrance to The Bridge is impressive and the staff was very kind. There are two side to the lounge and we opted for the left hand side first. The views from the lounge are perfect for avgeeks with great views of the tarmac. The lounge was fairly empty on this side of the lounge which I enjoyed. The decor is very stylish and the seating quite comfortable. And I can always appreciate a sparkling clean restroom!

Hands down, Cathay Pacific lounges at HKG have the best lounge food. There was a buffet of lunch items, both Cantonese and Western. The dumplings were quite good and the selection was great. You must try the signature XO sauce! The bar on this side of the lounge was self service.

We left the lounge briefly to do some quick shopping and returned to The Bridge. This time we turned to the right hand side of the lounge which was much more crowded than the other side but not terrible. The bar on this side is staffed and you have similar food options.

We headed to the gate about 30 minutes before departure time and our 777-200 began boarding about 5 minutes later. The flight was not very full in economy or business so we only used one jetway. We were seated in 15H & 15K and pre-departure service began right away. We were brought options of champagne, orange juice, and coconut juice. I went classic and stuck with champagne. Seats are somewhat of a hybrid between a recliner and angle lie-flat. The seats were quite comfortable for a short-haul flight. They are certainly more comfortable than most U.S. domestic first class seats.

There were only 6 people in business class so we received quite a bit of attention from the flight attendants. Menus were brought before takeoff and our selections made as soon we hit 10,000 feet. Due to the short flight, meals were served right away but without feeling rushed. Our lunch consisted of fresh fruit, roast chicken served over root vegetables, polenta, and a chocolate mousse cake. The meal was excellent and the service was attentive.

As we completed our meals, our trays were promptly cleared although I had plenty of time to enjoy a second glass of champagne before final approach. We arrived at Taipei Taoyuan right on schedule and said goodbye to the friendly crew. Our flight was continuing on to Fukuoka but everyone had to deplane for transit or to pass through customs. Customs was initially slow until additional lanes were opened and were were on our way. We were head to the Taiwan HSR but I didn’t particularly enjoy the long bus ride to the rail station. Transit time to the center of Taipei including bus transfers was about an hour.

With a 7:00 AM departure, we had to wake up quite early for our departure. Early morning departures are definitely not my favorite. We opted for a taxi to the airport and after using the hotel staff to translate for our taxi driver, we were on our way. This early in the morning, we were quick to the airport, taking only 20 minutes. We headed straight to the Cathay Pacific lounge which was hidden down a passageway but there was plenty of signage. There was a bit of construction going on nearby. This time were given paper lounge passes instead of just showing our boarding passes on our phones. Although I’m sure either would be acceptable.

There is no comparison to the lounge in Taipei to the lounges at HKG. Still, the lounge was tidy and uncrowded. The food selection was mediocre with a small selection of pastries and dumplings. The washrooms were a bit small but clean.

We headed to the boarding gate about 30 minutes before departure time but boarding had already started. Economy was pretty full but business class was only about half full. We boarded through 2 jetways this time and took our seats on the opposite side of the plane in 14A & 14C. This time we were on a 777-300 which featured a landing gear camera which was a cool entertainment feature.

Pre-departure beverages were offered immediately although no coconut juice this time. I skipped the champagne and stuck with orange juice. 7:00 AM is a bit early for me for champagne. Menus were handed out although there was only one option for breakfast. Once we were airborne, breakfast was served which consisted of fruit, miniature omelettes, sausage, potatoes, and a croissant. It was basic but good for airline food. I paired it with a Hong Kong milk tea which was quite good. Turns out it was powdered Lipton tea served with hot milk and the sweet flight attendant snuck me a few packets of tea to take with me!

Serving carts were used on this flight but they weren’t used on our outbound flight. Presentation is always nice when the cart isn’t used but it really doesn’t matter to me. Trays and cups were collected more promptly on this landing so I didn’t get to finish my second cup of tea. We landed right on time into Hong Kong and arrived directly at the jetway. We were connecting onto Delta back to the U.S. in a couple of hours so we had to clear customs and pick up our checked bags. This left us unable to return to The Bridge or any of the other post-security lounges. We did receive passes to The Arrival lounge which was near the ticketing counters, pre-security so after re-checking our bags onto Delta, we headed to The Arrival. When we walked in, I couldn’t quite believe how small the lounge was! There wasn’t even a washroom in the lounge, just a few desks, a self-serve bar, and some snacks. There are showers available but no toilets so you must leave the lounge.