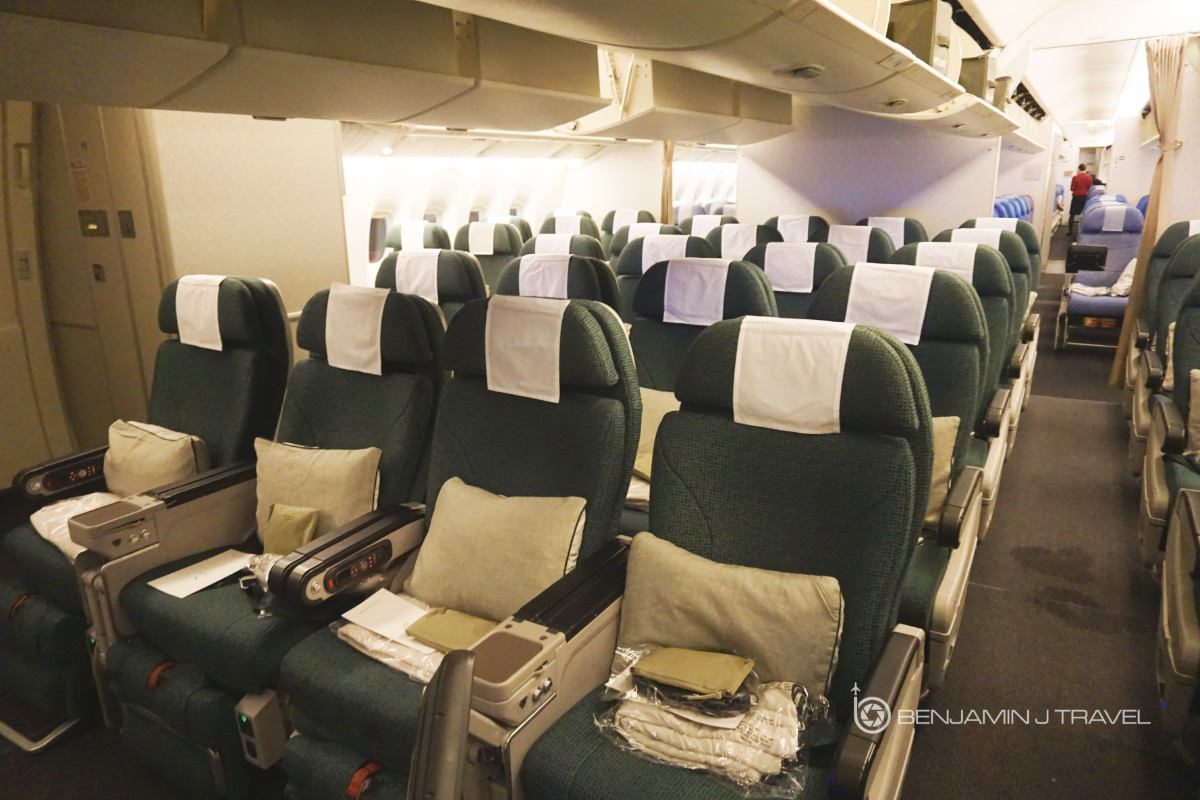 Making my way to Singapore, my outbound transpacific leg would be in Cathay Pacific 777-300ER Premium Economy. After spending some time at the Qantas First lounge in the Tom Bradley International Terminal (TBIT), I decided to head to the gate a bit early. Our flight was to depart from Gate 153 although no boarding the time was published on my boarding pass or in the lounge so I decided it wouldn’t hurt to head the gate a bit early.

As I approached the gate, I saw that we were due for a boarding time of 9:45 PM so I only had about 10 minutes to pass. Ultimately, we didn’t board until 10 PM however. There was an agent with a sign specific to the Premium Economy cabin. Boarding for Premium Economy was to follow First & Business Class but I was able to board early thanks to my oneworld Emerald status. The boarding process was controlled fairly well by the Cathay gate agents and things went fairly smoothly.

Cathay’s Premium Economy cabin is directly behind Business Class in a 2-4-2 layout. However, the layout is slightly staggered due to the placement of the lavatory in Premium Economy. For example, Row 30 only has a center section of 4 seats. The seats are upholstered in green, the signature color of Cathay Pacific. I was seated in 30G, an aisle bulkhead seat in the center section.To my right was the lavatory and emergency exit. Legroom was generous and being in an aisle seat, there was even more room to spread out. As this is the bulkhead row, the tray table is in the armrest and the width of the seat is slightly reduced.

An “amenity bundle” was placed at every seat which included a blanket, pillow, Cathay Pacific branded headphones, and an amenity kit. Each seat in a Premium Economy features an extendable leg rest.There are power ports at every seat in all classes on Cathay’s 777-300ERs. There is no WiFi on the 777-300ER. The cabin is showing a bit of age but it’s still fairly well-maintained.

Pre-depature beverages were offered in the Premium Economy cabin with a choice of champagne, orange juice, or water. Shortly before departure, one of the flight attendants, Tracy, came by to offer my a bottle of water and thanked me for being OneWorld Emerald. This seems to be common aboard Cathay Pacific and it’s much appreciated as a frequent flyer.

As we were departing very late and my body was already two time zones ahead, I fell asleep during our taxi at LAX. I woke up as the post-departure meal service was beginning. I opted for the beef filet dish which was service with potatoes and roasted vegetables. The beef was overcooked but I wasn’t particularly hungry anyways. I finished my meal rather quickly and fell asleep near right away. After dinner, I fell asleep for nearly 8 hours. I was pretty exhausted.

After my very long nap, I awoke to my seat mate’s fidgeting. He always seemed to be in motion the whole flight in addition to a lovely cough the whole flight. I watched a couple of movies on the IFE which is fairly user-friendly. The movie selection in English is quite good. I caught up on a bit of work on and off. I did use the Cathy headphones which were fine but not as nice as the Bose headphones on American Airlines Business Class. About 4 hours before landing, the crew came around offering beverages and snacks which were mostly shortbreads and crisps. Throughout the flight, the crew was polite and friendly.

Keep in mind the while the bulkhead in Row 30 offers a bit more legroom, be prepared for passengers to walk in front of you frequently to get to the lavatory. There is only one lavatory in the Premium Economy cabin. Alternatively, I’d suggest seats 32H and 32K as it’s on the same aisle as the lavatory and there’s a little extra legroom.

About 90 minutes before our arrival into Hong Kong, the pre-landing breakfast service began. I opted for the dim sum and noodles which was served with fruit and yogurt. The breakfast was much better than the dinner service. Coffee and other beverages were offered as well. All meals in Premium Economy are served on trays and somewhat of an upgrade of standard Economy Class meals. But don’t expect Business Class quality dining.

Meal trays were collected promptly and the crew began to prepare the cabin for our arrival in Hong Kong. Our arrival was scheduled for before 6 AM so it was still dark out upon landing. We soon arrived at our gate in Hong Kong and had a rather quick deplane. The crew politely thanked everyone for their business on the way out the door.

Overall, the experience on Cathay Pacific 777-300ER Premium Economy from LAX to Hong Kong was pleasant. It wasn’t a remarkable flight but one can count on Cathy Pacific for a positive experience nearly every time. The Premium Economy seat is a nice compromise  on cost and comfort between Economy and Business Class. I may have just been exhausted, but I managed to get quite a bit of sleep on this flight.

What are your favorite Premium Economy cabins? Would love to hear your thoughts in the comments below.