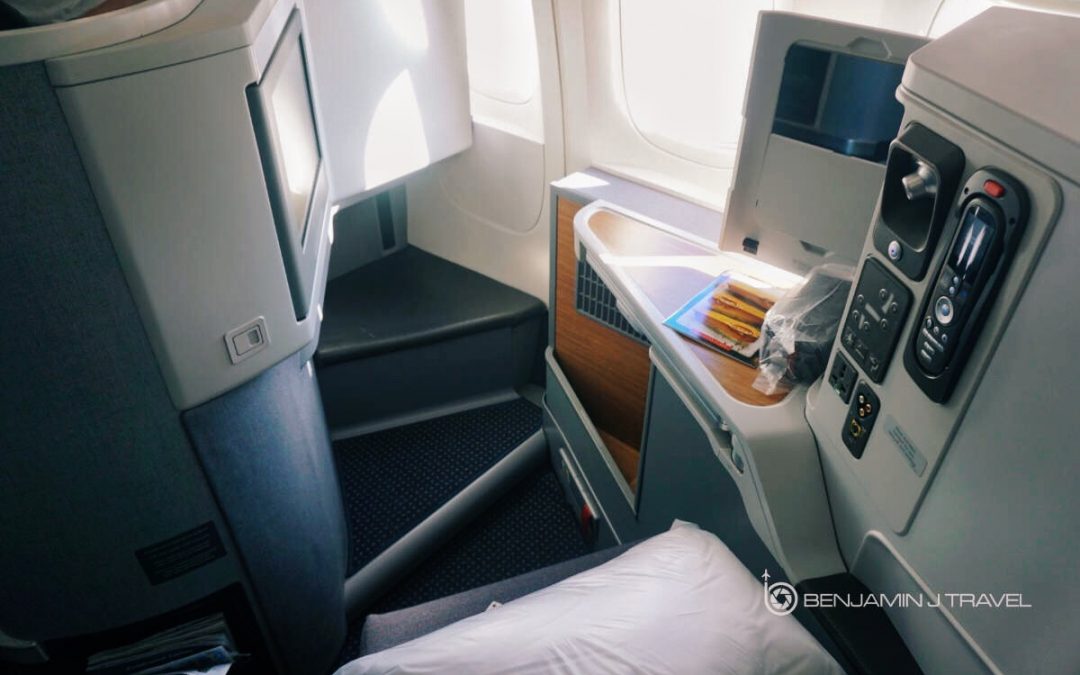 Returning home from a fantastic trip in Australia, it was sadly time to head home to Dallas. On the bright side, our ride home would be in comfort in American Airlines’ 777-300ER Business Class from Sydney to Los Angeles. On our outbound journey, we had flown to Sydney in Economy Class which wasn’t quite as comfortable. We would be departing from Sydney’s International Terminal 1.

After spending about 45 minutes in the Sydney Qantas First lounge, it was time to head to our boarding gate. With our flight U.S. bound, there was a bit of extra security around the boarding “corral”. We arrived at the gate just as Business Class was beginning to board. The gate agents kept the boarding process very organized so there was no fuss at the gate.

The seat is spacious an adjustable armrest, spacious table spaces and lots of storage options. Seat controls are electronic and easy to operate. The seat turns into a fully lie-flat bed with a reasonable amount of privacy offered. There are both AC and USB power ports available. Slippers, Bose headphones and a bottled water were placed in the side storage buin. There was a mattress pad, duvet, and full size pillow at the seat; all very comfortable. An amenity kit by Cole Haan was also at my seat.

The crew was incredibly friend from the start of this flight. Pre-departure beverages were offered with a choice between orange juice and champagne. As boarding neared completion, the crew brought a cart through Business Class offering pajamas to passengers. We ultimately pushed back from the gate very close to our scheduled departure time. Our takeoff climb was smooth with postcard views of Sydney Harbour as we climbed out of SYD. I was sad to be leaving Australia as this was one of my favorite trips to date but the stunning views of Sydney on our takeoff climb was a nice parting gift from Australia.

Shortly after reaching our cruising altitude, warmed nuts were offered along with an initial beverage service. About 30 minutes later, the full lunch service began. I’ll admit that after having breakfast in the Qantas First Lounge, I wasn’t incredibly hungry. But I wanted to at least give everything in the meal service a sample.  First, starters were offered which consisted of a mixed greens salad and beef carpaccio. The salad and beef starter were both pretty good. I tend to find catering out of  non-U.S. airports to be a step above those in the U.S.

Onto the main courses, I had selected the beef which can often be overcooked in aircraft ovens. But to my surprise the beef was cooked nicely, albeit approaching well-done. The accompanying vegetables were tasty as well. I was pretty tired after lunch so after finishing my meal, I headed to the lavatory to change into my pajamas. I rarely put pajamas on during flights as I don’t find airplane lavatories to be very clean for my preference. But considering this was a 13-hour flight and I planned to sleep most of the flight, it seemed appropriate.

I had originally planned to skip dessert but after changing into my pajamas I changed my mind. I decided for a classic American Airlines ice cream sundae. As always on American, the ice cream sundae was very tasty. Snacks were offered throughout the flight on request along with options available in the galley. Since I slept most of the flight, I didn’t take advantage of any of the snacks.

In-flight WiFi is $19 USD for the entire flight duration. But on this particular flight, the connection was not great. It didn’t work very well at any point. There’s a large IFE screen at the Business Class seat and the Bose headphones are a great amenity. But I didn’t watch any movies as I slept most of the flight. I got fantastic sleep on this flight and the comfort of the lie-flat bed certainly helped.

I woke about 2.5 hours out of Los Angeles and the smell of food began to fill the cabin. The pre-landing breakfast service began about 2 hours before arrival. I opted for the hot breakfast option with scrambled eggs, bacon, tomato, and potatoes. Fresh fruit, yogurt, and a ginger smoothie accompanied the hot breakfast. Everything was tasty and presentation was decent. My own dislike was the fresh fruit which wasn’t exactly fresh. But fruit on planes is rarely good in my experience.

The Bose headphones were collected about 45 minutes before arrival and the crew made announcements in preparation for arrival. I changed back into my regular clothes after being quite comfortable in my pajamas. I thought for a second if it was too ridiculous to keep them on. I quickly came to reason that pajamas in the terminal was a just a bit too casual for my taste 🙂

Soon we were on the ground in LAX and reached our gate at Tom Bradley International Terminal, 30 minutes or so ahead of schedule. We were quickly on our way and the crew thanked us for our business on our way off the plane. Our gate was very close to U.S. customs and paired with Global Entry and hand luggage only, we were landside in less than 10 minutes.

Overall, this flight was a really great Business Class showing by American Airlines. Other trip reports (my own included) highlight the inconsistency of American Airlines’ Business Class service. But lately, I’ve had more and more great experiences. Not sure if anything is actually changing at American but I’ve certainly been pleased. The negative details of this flight were only minor in nature. The positive aspects like solid good catering, genuinely friendly service, and cozy pajamas shined on this flight.

Have you flown American’s Sydney to Los Angeles route? What was your experience? Share in the comments below!