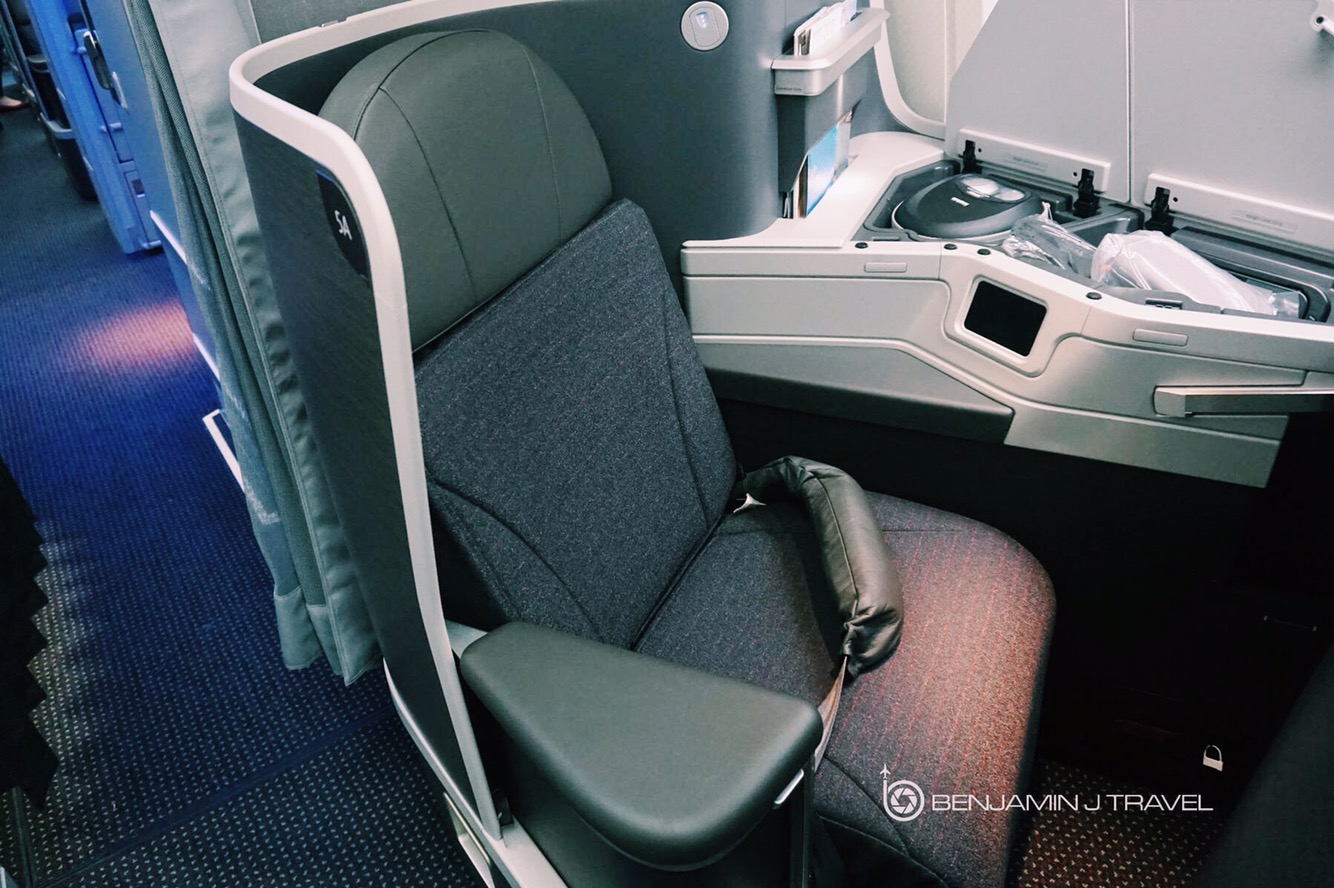 Making our way to Berlin for a long weekend trip, we found ourselves in American Airlines’ Business Class from Dallas to London on the 777-200. While this wouldn’t be my first flight on one of American’s retrofitted 777-200s, it would be my first flight in the 777-200 retrofitted Business Class. I’ve had several journeys aboard American’s 777-300ER in Business Class on this same route and others and always enjoyed the reverse herringbone configuration. And while the seat is always a treat, the service can certainly be hit or miss on American.

We spent a bit of time in the Amex Centurion Lounge at DFW before making our way to our boarding gate, D33, about 10 minutes before our scheduled time. Boarding started a bit early which has begun to annoy me. If you schedule a certain boarding time, stick to it so passengers can plan their time accordingly. Gate agents for American seem to be in quite the rush lately. But the gate area was pleasantly a bit empty and the boarding queue was calm. We boarded with Group 1 (Business Class) was being called so we were among the first few passengers to board.

American has been rolling out a complete retrofit of their 777-200s since early 2015 but it’s been plagued with problems, specifically their Business Class seat. In Business Class on American’s 777-200s, some are retrofitted with seats manufactured by Zodiac, the remainder by B/E Aerospace.

SeatGuru isn’t exactly accurate on their seat maps American’s 777-200 so unfortunately a bit difficult to predict which Business Class seat you’ll end up with. But the much improved B/E Aerospace seat is installed on the majority of the 289-seat configuration of the 777-200. If you really want to get into the details, there’s a thread on FlyerTalk with all the details of the 777-200 Business Class seats.

Fortunately for us, our aircraft was fitted with the newest B/E Aerospace Business Class seat which features 37 Business Class seats in a 1-2-1 configuration. All seats feature direct-aisle access. I was seated in 5A, a window seat, and Chris sat in 5D, an aisle seat in the center section. Row 5 is the last row of the forward Business Class cabin.

From the first moments onboard, the service was warm and welcoming. Dana was leading in our section of Business Class and was assisted by another lovely flight attendant who’s name I fortunately didn’t catch. A round of pre-departure beverages were offered; choice of water, orange juice, or champagne. We settled into our seats and I took some time to snap a few quick photos of the cabin.

The Business Class seat shares some similarities to that on American’s 777-300ER. Not any better or worse than the 777-300ER, just different. The seat is overall spacious and there’s lot’s of little storage spaces I found to be handy. The power and USB ports are easy to locate and it’s nice that they are inside a storage bin, perfect for keeping your phone and chargers accessible. There were even slippers on this flight which was I don’t recall seeing before on an American Airlines flight.

The Bose noise-cancelling headphones are always welcome although they will collect them about an hour before landing. I also collected yet another Cole Haan amenity kit which fortunately I really like but also enjoy giving away. There’s a fair amount of privacy and I had two full windows in seat 5A. I’m always a bit nervous being too close to the lavatory or galley but the noise and traffic was not on bother in this configuration. Overall, the Business Class seat on the retrofitted 777-200 is fantastic.

We departed from the gate just on time and our dinner orders were taken while we awaited our turn for takeoff. I decided on the Cauliflower Orcecchiette which was an interesting pasta dish. But Dana said it was really good so I went with it. Once in the air, hot towels were distributed, followed by warm nuts and the post-departure beverage service.

About 45 minutes into the flight, starters were handed out which included a wedge salad and “goat cheese lollipops” which was pretty tasty but a little unique on presentation. Entrees came out shortly after although my entree was bit slow to come out. Dana apologize profusely for the short delay. The Orcecchiette was not pretty in terms of presentation but I have to say it was quite tasty. Dana warned me that it was quite spicy but I found it to be just the right amount of spice. Dessert followed and I opted for the ice cream sundae which is a reliable in-flight favorite for dessert.

After dinner service dishes were collected, I pulled out my MacBook to catch up on some work and used the in-flight WiFi. The connection on this particular flight weak and slow so I was disappointed with the WiFi connection throughout this flight. However, I must say the addition of WiFi service to the retrofitted 777-200s is a welcome update. I stayed up for about an hour later before starting to prepare for sleep. I didn’t watch any movies but I love the large IFE screen and the movie and TV selection is reasonable. There are handy electronic seat controls and I put the bed in to lie-flat mode before dozing off for a good four hours of sleep. There are individual air vents on the 777-200 in Business Class so it helps to keep that cabin cool.

About 90 minutes out of London, I began to wake up and could sense breakfast service was about to begin. Breakfast orders were taken and I opted for the strata with chicken sausage. It was tasty and hearty breakfast. I always appreciate when the pre-arrival breakfast is more than just fruit and yogurt. Trays were cleared soon and the Bose headphones were collected as well.

Soon, we were on approach to Heathrow after an expected 30 minute air traffic control hold over London. Ultimately, we had a smooth landing into Heathrow, about 40 minutes behind schedule. We arrived at Terminal 3 as expected and gathered our bags and deplaned rather quickly. I wanted to make sure we could grab some quick lounge time before our connecting flight to Berlin.

The retrofit of the 777-200 represent a significant update to to American’s Business Class product on these older widebodies, even in Economy. I was thoroughly impressed with the 777-200 retrofitted Business Class with no major complaints. I was also quite pleased that our aircraft was equipped with B/E Aerospace seats rather than the Zodiac seat.

But I really appreciated the genuine and warm service from Dana and the rest of the Business Class crew. The meals were all good and the service attentive. And while I’m a loyal American Airlines customer, I know the service can be inconsistent. I wish the service was always this lovely on AA. This was the first time in a while that I’d been on a 777-200 to London but as long as I’m in Business Class, I’m happy to catch a ride aboard anytime!