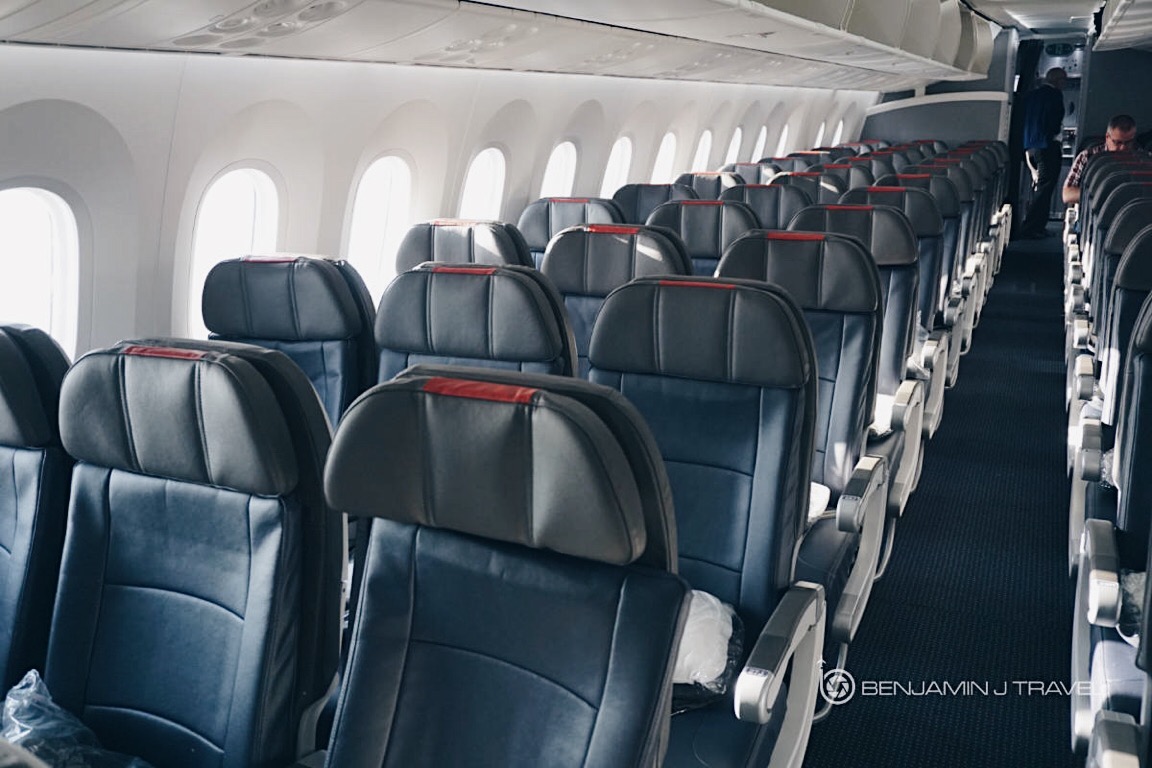 Making my may to Paris for a quick extended weekend, I’d be traveling with American Airlines in 787-9 Economy Class. I was pleased when American “upgraded” this route from an older 777-200 to a 787-9 although now that nearly all 777-200s have been retrofitted, the 787-9 is newer but a slightly smaller passenger capacity. Before departure, I spent about an hour in the  DFW Amex Centurion Lounge before heading to my gate about 15 minutes before departure.

American loves to start the boarding process early so I’m always eager to get to my gate a few minutes early. On this trip in particular, I was extra eager to board in the Priority group. I had booked the ticket only a few days before and was not able to snag an extra legroom Main Cain Extra sea in Economy. Fortunately, boarding began at the scheduled time and I boarded in Group 2 thanks to my Executive Platinum status.

I had booked a center section, aisle seat in the rear Economy Class cabin hoping that some of the center seats would remain empty. I took my seat in 25H, an aisle seat on row behind the bulkhead row. I secured my backpack in the overhead bin and snapped a  few cabin photos. The seat map was showing the cabin as about 60% full a couple of hours before departure. But the cabin ultimately was completely full as there were quite a few employees traveling standby.

This was my first flight in Economy Class on the 787-9 with American. I’d previously flown several flights on the 787-9 in Premium Economy which is a nice overall experience. Legroom in standard Economy isn’t much to rave about but about average. The windows on the 787-9 are higher than comparable aircraft so that passengers from any seat on the aircraft is able to see out the windows. There are also no window shades on the 787-9 as windows are electronically dimmed.

Each seat has a nicely-sized IFE screen with east to use controls and a good selection of entertainment. There is a USB and AC power port at every seat. International WiFi is offered on the 787-9. It’s offered by Panasonic and reasonably priced at $19 USD for the full flight duration.

We pushed back from the gate right on time and had a long taxi before departing from DFW. We had a pleasant climb out of DFW as the sun was setting behind the horizon. About 40 minutes after departure, a beverage and snack service was offered. The snack was a simple back of pretzels and I had a glass of “white wine” in a plastic cup. About 30 minutes later the crew came through with the main dinner service. The chicken and rice dish was certainly one I’ve had on American long-haul flights before. But even though the meal doesn’t look like much, it was fairly tasty.

Meal trays were collected in a prompt manner and the crew began to prepare the cabin for most passengers to sleep. The crew was polite and efficient but not overly friendly. I browsed a move or two and used the in-flight WiFi service which had decent speed. I usually sleep quite well on planes, even in Economy Class. But I struggled to sleep on this particular flight. Eventually I was able to doze off for about an hour or so.

About 90 minutes before landing in Paris, the crew came about the cabin with a light breakfast “snack” which consisted of yogurt, granola, and a muffin top. I’m not shy to grip how much I hate these terrible Economy “breakfast meals” on US legacy carriers. It was cloudy and rainy day in Paris so our final decent was a bit bumpy. We couldn’t even see the ground until about 30 seconds before landing. On the ground in rainy Paris, we taxiied to Terminal 2A and fortunately had a gate so no bus was needed.

Overall, for Economy Class, the 787-9 offers a reasonable level of comfort for passengers. I enjoy the larger windows, the roomier overhead bins and quieter cabin. The crew on this particular flight was rather unmemorable but overall no complaints. I just can’t wait for American Airlines to ditch the over-sweetened yogurt on all their flights!