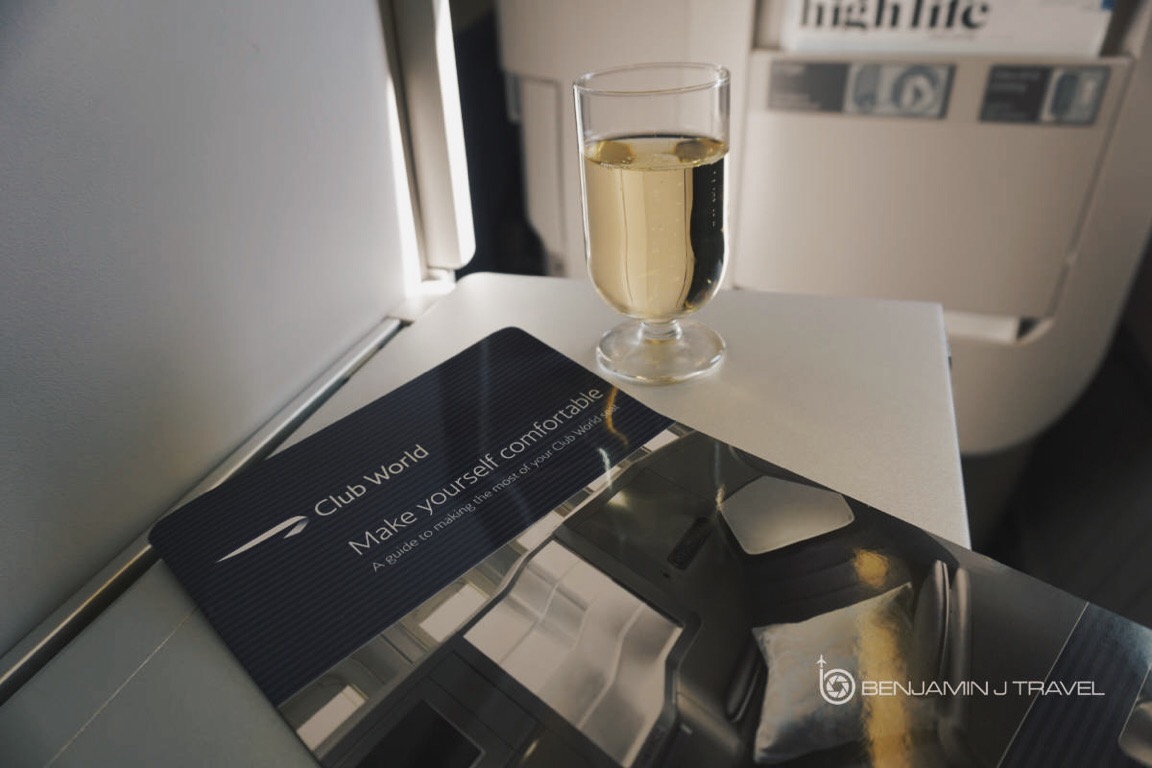 Thanks to the joint transatlantic venture between OneWorld partners American Airlines and British Airways, there isn’t a shortage of flight options between Dallas (DFW) and London Heathrow (LHR). We had purchased tickets from Dallas to Budapest in British Airways Business Class cabin (branded as Club World) for a fantastic cash price. We were looking forward to the experience in 777 Club World and our trip to Budapest.

Our journey started in the Amex Centurion Lounge at DFW but ultimately spent most of our time in the British Airways Lounge due to overcrowding in the Centurion Lounge. About 15 minutes before scheduled boarding, we headed to the boarding gate but boarding was a tad delayed. I was disappointed the gate agents didn’t communicate any type of delay. Boarding was a bit chaotic with premium cabins and OneWorld elites called to board all at once but just about every passenger mobbed the gate agents.

British Airways currently alternates between a 777-200 and a 747-400 on the Dallas to London route. I have nostalgic love for the 747 and it’s upper deck Club World cabin offers more privacy than the 777. On it’s 777s. British Airways squeezes their Business Class cabin into an 8-across in a 2-4-2 configuration. However, each still seat does have direct aisle access. We took our seats in a window pair in 13A and 13B, each seat facing each other. All window seats are rear-facing and all aisle-adjacent seats are forward facing. All of the centermost seats are rear-facing. Aisles seats still offer much less privacy than the window seats.

If you’re traveling with a companion, I think the pair of seats near the windows are actually a great layout. However, it’s not the best layout if you’re raveling alone. The seat itself isn’t bad as it goes fully flat and privacy can be quite good in the window seats. The seat has a very large IFE screen that folds out which must be put away after the safety video plays during taxi. There are both AC and USB power outlets at every seat in Club World. I like the big footrest in the Club World seat but it must be stowed during takeoff and landing. For privacy, there is a opaque partition between the aisle and window seat that can be raised and lowered with a button.

Amenity kits were placed at every seat and come in a simple drawstring bag. The amenity kit was stocked with Elemis branded toiletries but it’s not the sexiest amenity kit. However, it terms a of being reusable, I find myself re-purposing this amenity kit over and over for storage.

Pre-departure beverages started shortly after we boarded . We were offered water, champagne, or orange juice and of course I indulged in champagne.and Kris, the Customer Service Manager, introduced himself over the intercom. Boarding was a bit slow but ultimately we only departed the gate about 20 minutes late. Soon we were on our way for departure with a quick taxi and takeoff for London.

We were soon at our cruising altitude and drink service began in the cabin. Snack mix and beverages were offered by the crew from the beverage cart. I started off with a Kir Royale. Dinner orders were soon taken shortly after the beverage service. Starters began with a mixed greens salad and a plate of smoked salmon. The starter plates has a fairly boring presentation but tasted pretty good.

For the main entree, I opted for the grilled salmon with couscous and Chris ordered the beef filet. The same bland presentation but good taste carried over to the main entree. I enjoyed my grilled salmon and couscous but Chris thought his beef filet was just average. Trays were collected in a quick manner. Dessert followed and I opted for a a caramel crumble pie. Cheese and biscuits were available as an option but I declined.

After dinner service was complete, I browsed a few movies on the IFE. There is no WiFi service on British Airways’ 777s. I didn’t stay awake long and soon made my seat into a lie-flat bed. The seat controls on the Club World make it easy to switch seat modes. I don’t care much for the cheap blankets that are given out on British Airways. They aren’t very soft and combined with a warm cabin, I had trouble staying asleep. Ultimately, I slept on and off for 4 hours.

About 90 minutes before arrival at London Heathrow, a light breakfast service began. Fruit, croissants. and bacon rolls were offered in the Club World cabin. Coffee, tea, and juice were offered as well.  The breakfast was quite light and not as the breakfast offered on Virgin Atlantic in Upper Class. About 20 minutes before landing, all trays and service items were collected and the cabin was prepared for landing.

We arrived on the ground at London Heathrow close to on time and soon arrived at your gate in Terminal 5. We deplaned quickly and the crew thanked us for our business on the way out to the jet bridge. Overall, this flight in 777 Club World was about average. The crew was polite and efficient but didn’t go out of their way to provide fantastic service. The food was fairly good but I don’t feel as if British Airways impresses with presentation in Business Class.

Many folks have very strong feelings about the Club World seat and it’s dense configuration. But overall, I don’t think it’s a terrible seat. If you’re int the window sear, the privacy is actually quite good. But, it’s still not as competitive as the American Airlines 777-300ER Business Class seat.

What do you think of Club World on British Airways? I’d love to hear your thoughts in the comments below.