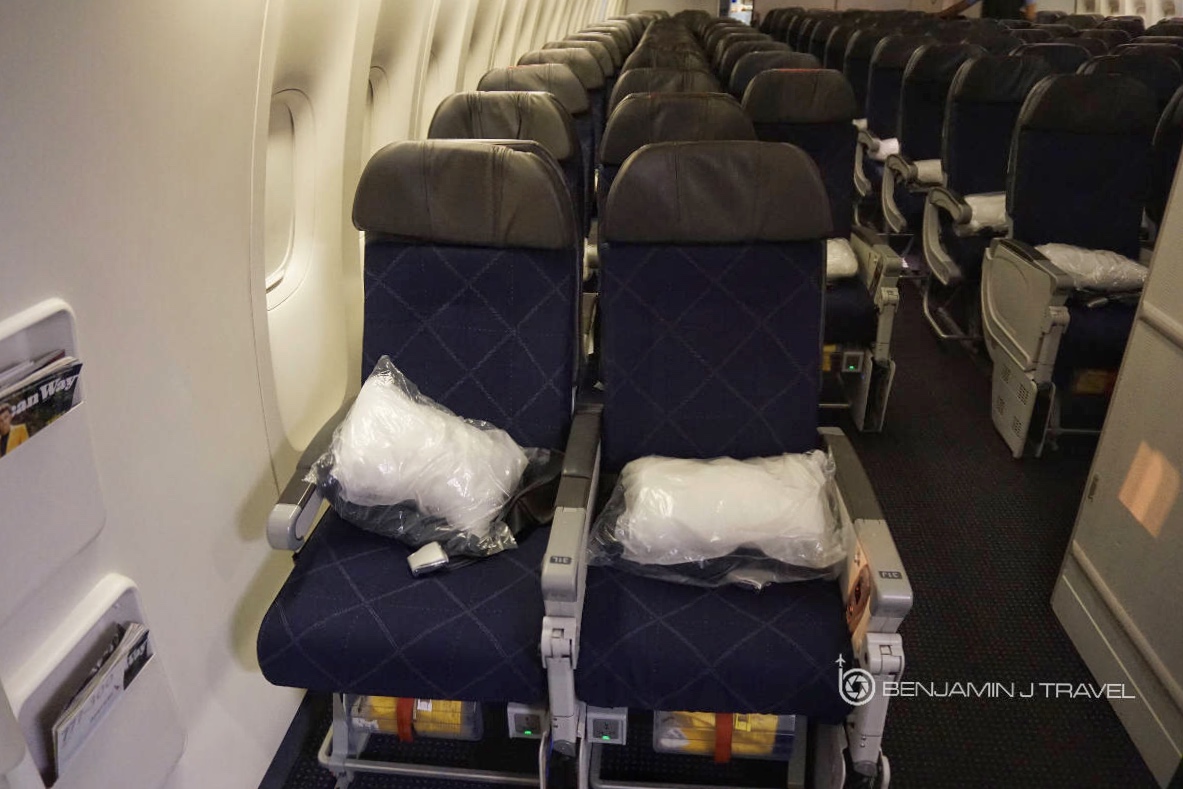 We were departing from Terminal 4 so fortunately TBIT and Terminal 4 are now connected airside by a walkway. American Airlines competes with several airlines on the Los Angeles to Sydney route and there are few upgraded amenities on this flight in every cabin, including Economy Class. I wouldn’t be surprised if American’s codeshare partner Qantas pushed American to offer a higher quality of service on this route.

We boarded with Group 2 for Executive Platinum and once on board, the plane was still quite empty. Chris and I were seated in the pair of bulkheads seats on the left-hand side of the aircraft: 31J and 31L in the rear Economy cabin. There is a Main Cabin Extra “cabin” at the front of Economy Class with 3-3-3 seating rather than 3-4-3 seating as is the case in most of Economy.  Row 31 however is the only extra legroom row in the rear Economy cabin. This is considered a Main Cabin Extra row due to the extensive bulkhead legroom. If you’re sitting in 31A or 31L, be aware of the emergency door protruding into your legroom. It’s not terrible but something to keep in mind. Bulkhead seats also do not have movable armrests so the seat width is slightly reduced.

I commonly pick bulkhead seats when flying in Economy Class. However, the reduced seat width on most bulkhead seats is starting to become more of an annoyance. There are both USB and AC power ports at every seat in Economy class along with an IFE screen for your entertainment. American Airlines generally offers a good variety of movies and TV shows. Both Chris and I had fussy power ports at our seats and my charger would keep randomly come unplugged.

Boarding was slow and then once the plane was fully boarded, there was a minor mechanical issue that needed to be addressed. The captain kept us to date on the repair regularly. While we waited, menus were distributed in Economy class which is a first for me on a US carrier in Economy Class. The last time I received a printed menu in Economy was on Air France. Ultimately we pushed back form the gate about 40 minutes late. We had a long taxi at LAX followed by a smooth climb to our cruising altitude.

Shortly after takeout a quick snack and beverage were offered which was simply pretzels and beverages. Since we departed from LAX after midnight, I found it hard to stay awake for dinner service. Dinner service started about 45 minutes after reaching out cruising altitude.There were three meal options in Economy Class for dinner: Pesto Chicken, Grilled Shrimp with Penne and Chilled Couscous with Chicken. Notably, there wasn’t a vegetarian option on the menu. I opted for the pesto chicken and Chris picked the chilled couscous with chicken. Both weren’t bad but nothing special.

After dinner, I logged onto the in-flight WiFi and caught up on a bit of writing. American Airlines’ international WiFi is reasonably priced at $19 USD for the full length of the flight.  The connection speed was good the first half of the fight but was much poorer later on. After about an hour of writing, I dozed off and got a solid 6 hours of sleep.

I woke up to the smell of pizza as the mid-flight snack service was starting. Warmed Stromboli wraps and ice cream were offered in the Economy Class cabin. In addition to the mid-flight snack service, snacks were set up in the galley for passengers to grab at anytime. There were a variety of snacks like pretzels and dried fruit. Water and orange juice were also available.

About two hours before landing, breakfast service began in the cabin. The crew handed out breakfast trays The breakfast service was a decent upgrade over the breakfast you’d receive typically receive on a Economy Class flight with American Airlines. Especially on transatlantic flights, you usually receive some over-sweetened yogurt and granola. To my surprise, there was a fairly significant hot breakfast. The breakfast tray included scrambled eggs, mushrooms, turkey bacon, and roasted tomato. Yogurt and corn muffins were also served with the hot breakfast. While presentation might not be the best, the breakfast was actually quite tasty.

The flight itself was really a mixed bag but definitely not leaving me impressed. There were definitely some extra touches on this flight like printed menus and enhanced meal service. The quality of the food was improved with small things like “fresh” bread instead of packaged rolls. However, the crew was incredibly inconsistent and the aircraft was very messy throughout the flight. After such a long flight in Economy, I was certainly looking forward a return flight in Business Class.