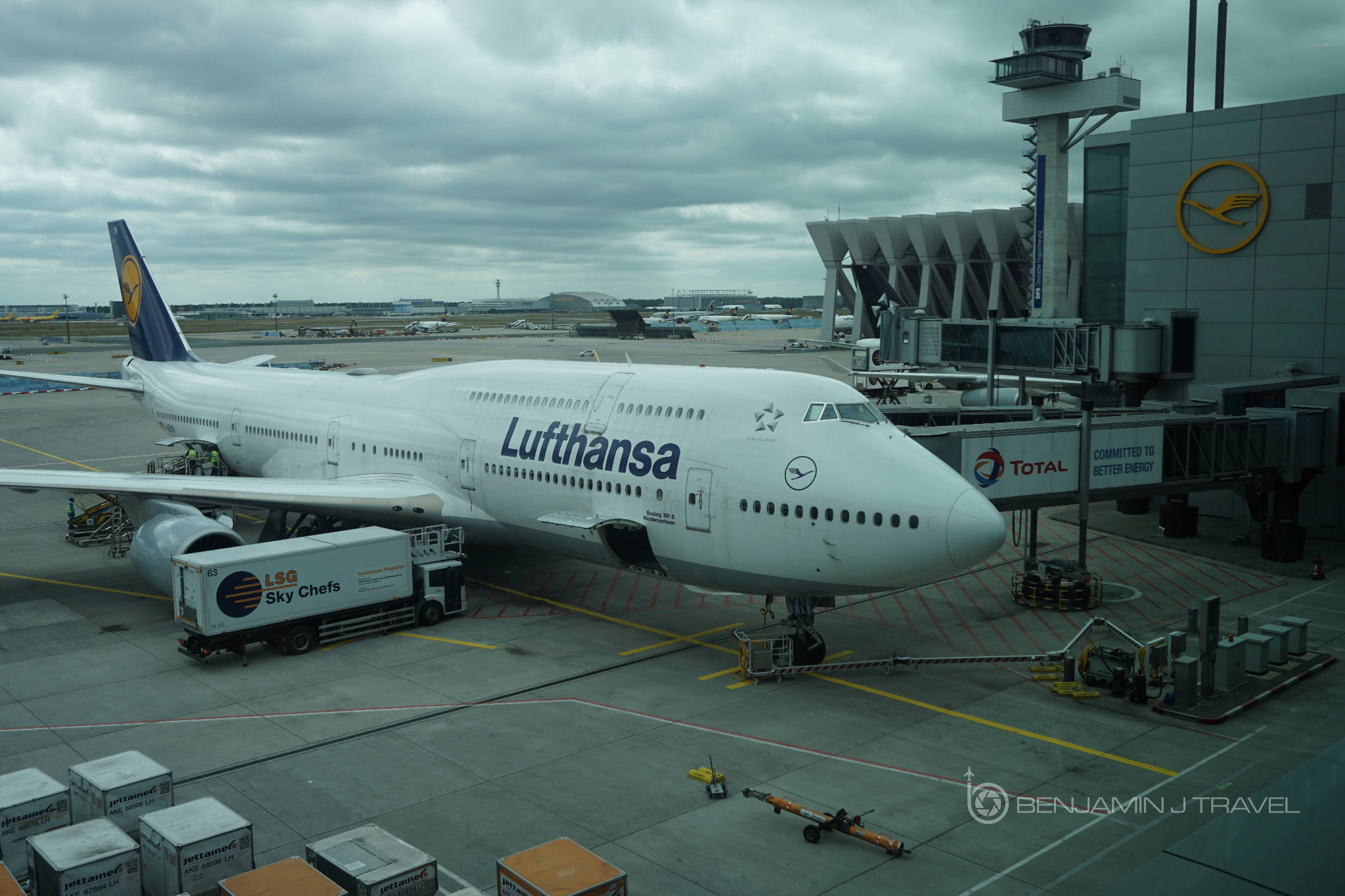 I’ve long been longing to fly aboard the 747-8 as well as Lufthansa Business Class. I’m not as acquainted to as many product so some fancier bloggers so I have some catching up to do! Most of all, I was was looking forward to being onboard the upper deck of the 747-8, the most modern version of the Queen of the Skies!

I had booked an award ticket with United MileagePlus to burn some miles that had been sitting around for a while. Unfortunately, I wasn’t able to book my entire journey from London to Dallas on one booking but I still snagged a decent deal. I burned 4,500 Avios on British Airways from London CIty to Frankfurt and 70,000 United miles from Frankfurt to Dallas. And as much as I would have loved to fly from Frankfurt to Dallas nonstop, I wanted to fly 747-8 Business Class rather than the A330 and the stop via Washington Dulles was well worth it.

After arriving at Frankfurt from my BA CityFlyer flight, I had about 2 hours of lounge time at the Business Class Lounge in Concourse Z. I had a nice refreshing visit to the lounge and before I knew it, it was boarding time. I had about a 5 minute walk to the gate and when I arrived, there was a quite a lineup of passengers. The 747-8 is quite a large plane but the Business Class line looked a bit longer than expected. Once boarding was announced, I realized that there were a whole of people in line for Business Class that were not. I bypassed a few dozen folks who were ultimately just blocking the gate.

Boarding was a bit slow once we were onto the jet bridge but as we reached the boarding door, things started to become more organized. I happy took direction up the stairs to the upper deck to take my seat in 86A! The flight was already fairly full so I didn’t get to snap as many photos as I would have liked but I got a few quick ones.

I took my window seat and greeted my neighbor in the aisle seat. We almost hit if off right away, chatting it up after I thought I misplaced my mobile phone. She was a sweetheart and we had great conversations throughout the flight.

On first impressions, I did notice the massive storage units along the windows. This excited me as I could easily put a few essentials items like my laptop and chargers in the storage unit by my side. This was a great features as I could place this items in storage right away without having to get int and out of the overhead bin throughout the flight. The seats are lie-flat but the seats angle towards one another. Some may find this a bit odd or annoying if sitting next to a stranger. But for me personally, it wasn’t a bother at all, even sitting next to a stranger. The angle-in is fairly moderate.

We were offered pre-departure beverages which included sparkling wine, orange juice, and water. I’m not sure why it was sparkling wine instead of champagne but it wasn’t a bit deal to me. I opted for the sparkling wine to start but our purser took drink orders for after departure and the Upper Deck crew introduced themselves. Now I know many of you will insist on champagne but being on a German carrier, I can’t resist a delicious Weiss beer.

Shortly after reaching cruising altitude, warm nuts and beverages were served. My Erdinger Weiss beer was also brought out. Shortly after beverages were served, orders for lunch were taken. I opted for the tuna starter and the veal main course. I knew the veal was a gamble as most beef dishes on flights are overcooked. The tuna starter come out first with excellent presentation. And it tasted just as good as it looked!

On the next course, came the mixed greens salad and the veal. The salad was fresh but nothing terribly exciting. The veal was a tad well done but not bad; the flavor was good. The sides the accompanied the veal however were very good: green beans, carrots, and roasted potatoes. Dessert followed and I selected the mousse cake. Presentation was good but for some reason there was a chunk out of one of my pieces of cake. Someone sneak a bite? The mousse was delicious and paired well with a nice cup of coffee.

I took a nice 2 hour nap after lunch which is longer than I’d like to on a daytime westbound flight but it sure felt good to get some rest. I hardly used the IFE system at during the flight other than the flight route tracker. But overall there was a good selection of films and TV shows. The entertainment systems is east to navigate. I still prefer screens like those on the newer AA planes as they are less prone to glare in direct sun.

Shortly after I awoke from my nap, we were offered a small snack and I opted for a small cheese plate. Ultimately I didn’t eat the cheese until the pre-landing meal was served as I dozed off to my nap. The pre-landing meal began about 90 minutes before we arrived at Dulles. For the pre-landing meal, we were offered a variety of small plates to choose from. I opted for the noodle soup, a pretzel, and a piece of peach streusel cake. The noodle soup was excellent; nice and hearty. The peach streusel cake was almost as good as the mousse cake.

After trays and dishes were collected, we offered one last chocolate treat as a “parting gift”. We began to make our descent into Dulles and landed smoothly, right on schedule. I took some extra time after arriving at the gate to snap a couple quick photos and gather my things. Unfortunately, after deplaning, I realized I had forgotten my roller bag! Yikes! I hadn’t yet boarded the shuttle bus and headed back down to the jetway. The Lufthansa crew was very helpful in retrieving my back from upstairs in a hurry.

After clearing customs in snap, thanks to Global Entry, I headed to the C Concourse for my connection to Dallas. I assumed I could access the United Club at C17 since I arrived on an international Business Class Star Alliance flight. But the agent informed me that this was only if I had flown on United metal. Really? I was disappointed but brushed it off. United Clubs aren’t much to get excited about and I only had 45 minutes to kill anyway.

Overall, I had a fantastic flight with Lufthansa. The 747-8 was as wonderful to fly as I had dreamed and being on the Upper Deck was a great feeling! The service was top notch and the German efficiency shined throughout the flight. The food, both taste and presentation were wonderful. I would happily fly this product again anytime. I’really like to try it on an overnight route to get a better experience of the lie-flat bed since I only angled it for a nap on this flight.

If you get a chance to take this route, I highly encourage it!