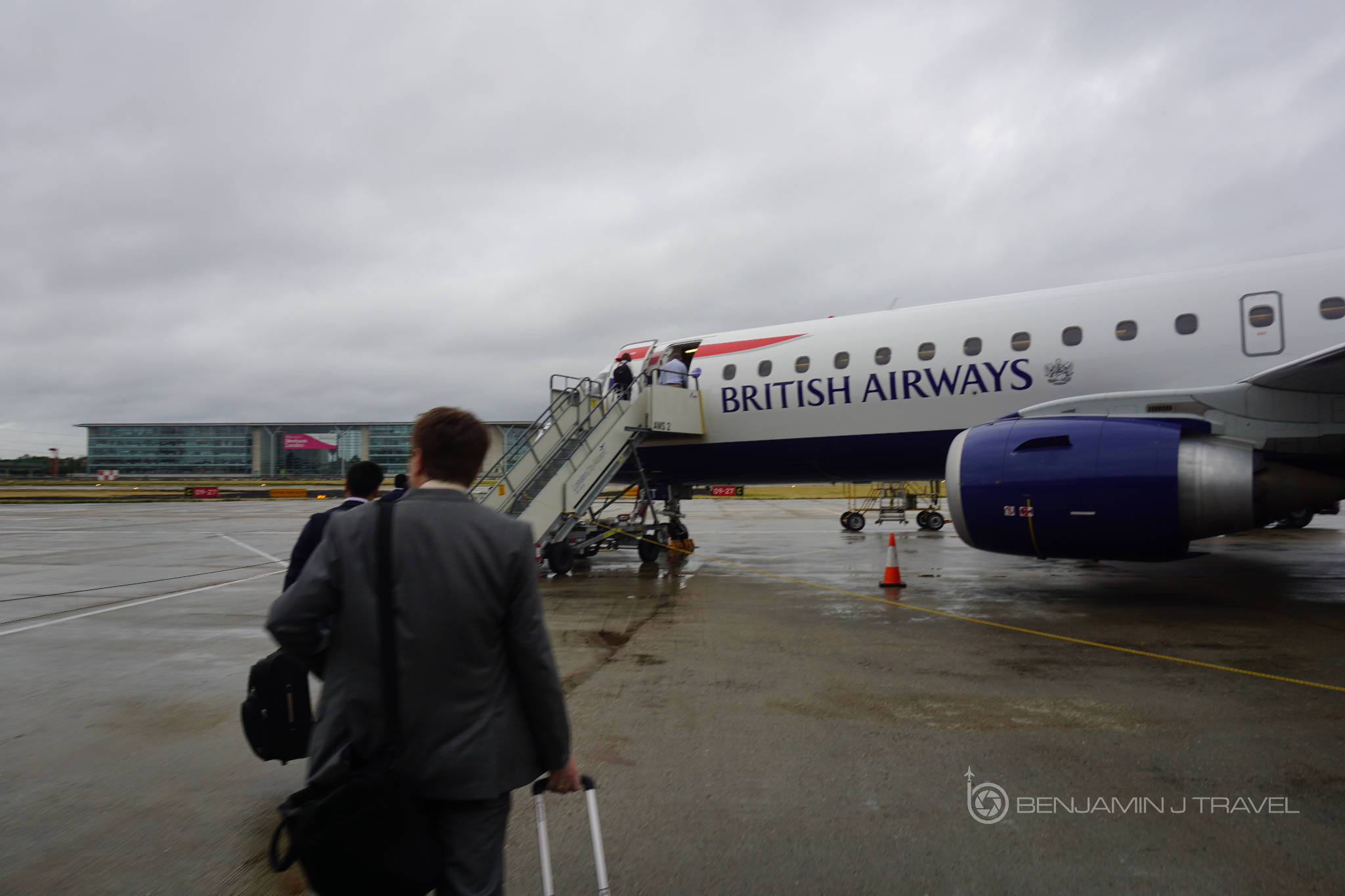 London City Airport (LCY) is the close airport to Central London and there are many benefits to flying from LCY: short security lines, proximity to the city, lots of amenities, and ease of navigating the small terminal. On the down side, the small terminal size can make the terminal feel quite crowded.

The journey from my hotel in Notting Hill to London City took about the same amount of time as the journey to Heathrow. The distance to London City is much shorter but the tube ride is much slower. Ultimately, it really didn’t save me any time on transit but it did save me a lot of time that I would have otherwise spent walking across Heathrow or waiting in security queues.

I arrived at LCY about an hour and fifteen minutes before boarding time. The security queue was very fast and only took about 5 minutes. Once post-security, I took a seat at one of the many cozy seats, complete with electrical outlets and WiFi. The boarding gate was announced 30 minutes before departure and once announced, I proceeded to the gate which was the very first gate along the concourse.

I was only the 4th or 5th passenger to have my boarding pass scanned and the gate agent asked me to check my roller bag. I had bought some gifts in London that had made my backpack quite full. Now I had packed specifically in a way to avoid checking a bag since I was on two separate tickets and did not want to spend an extra hour re-checking bags in Frankfurt. But my roller bag is smaller than average. I am fully aware that many people think their roller bags “always fit” when they are oversized. Not the case for me.

I politely but firmly let her know my backpack would fit under the seat. She tried to say I would have plenty of time . I let her know I had a connection in Frankfurt on a separate airline and it would be a challenge to re-check my bag in time. Her colleague gave her a look to imply just letting it go. Fortunately, she relented and let me proceed to take both my bags on board. Whew!

We headed down the stairs from the boarding lounge onto the tarmac to board our Embraer 190. I always love boarding by stairs on the tarmac but it’s even better when it doesn’t involve a bus! I took my window seat in row 6, just two rows behind the curtain. The crew was polite but not overtly friendly. And to my pleasure, my roller bag fit nicely in the overhead bin and my backpack under the seat in front of me. Boarding was prompt and we were soon pushing back for takeoff.

Shortly after we reached cruising takeoff, meal and tea service started. The flight from London City to Frankfurt is only about 90 minutes but the meal service feels like you’re on a longer flight. We were offered a light fruit plate or a hot breakfast. I was pretty hungry so I opted for the hot breakfast with eggs, mushrooms, ham, and sausage. I love the way hot tea is served on British Airways, politely poured over a serving tray. Again, the crew was polite and efficient but not very warm.

By the time breakfast was complete it was already time to begin our descent into Frankfurt. We arrived in Frankfurt right on time and arrived at a bus gate. The crew wished all passengers goodbye on the way down the stairs.

Overall the flight was a pleasant one. I appreciated the larger meal service on such a short flight. I would assume that the more robust meal is served due to the business-ortiented clientele on the LCY to Frankfurt route. The staff could have been a bit warmer but overall, a good flight. I’m just thrilled I was able to avoid checking my roller bag!