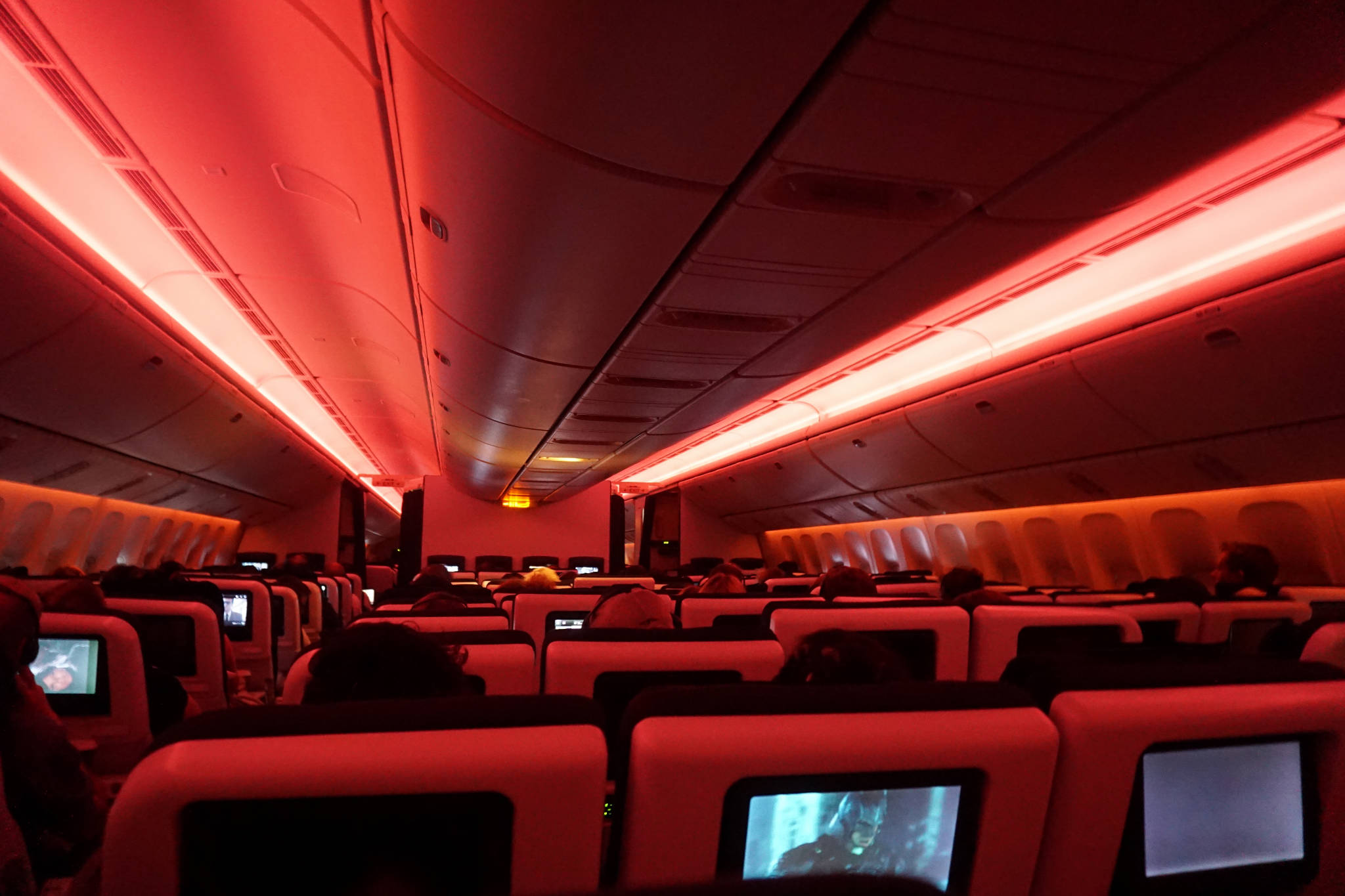 Taking the unconventional routing from Dallas to London via LAX, I was excited for my first flight aboard Air New Zealand, even if it’s in Economy! I had snagged a pretty cheap flight for under $400 USD one-way from LAX to London Heathrow. This route is “fifth-freedom” route for Air New Zealand, and a popular one! I had arrived on a separate American Airlines flight from Dallas so I used my Priority Pass membership to access the KAL Lounge in the Tom Bradley International Terminal before my flight.

This route is operated by a 777-300 which features Business, Premium Economy, and Economy. I had bid for a Premium Economy seat but my bid was unfortunately not accepted. So I was going to have to stick with standard Economy. I could have paid for Preferred or an Exit row but at 50 GBP, I just wasn’t up for the extra cost. I selected an aisle seat in the center section near the very rear of the plane. Ultimately, my hope was the very rear of the plane would be empty.

The boarding process was one of the most organized I have ever seen, in part due to the concise communication for the gate agents. The gate agents communicated updates to the departure lounge every few minutes with up to date information and boarding instructions. But also due to a very strict older lader who patrolled the boarding zones like a hawk. I wish there was someone like her at every boarding gate!

The hospitality of Air New Zealand starts right away as the crew greets you at the boarding door. This flight was about 90% full so at first getting everyone in their seats was a tad hectic. Once I made it back to row 59 where I was seated (second to last row!), things calmed down. My strategy to sit at the very back paid off as there were just myself an another passenger in the other aisle seat in our center section of our row. Two empty seats between us and room to spread out!

The seats in Economy or well-cushioned with a very nice movable headrest. The legroom isn’t anything special but I appreciated the power boxes for the IFE system was moved to the ends of the row to avoid clashing with legroom. There are no amenity kits in Economy but each seat had headphones, blankets, and pillows. The mood lighting was in Air New Zealand’s signature purple during boarding. I chatted a bit with a few of the crew members who were quite friendly and conversational. On a side note about Rows 58-60, due to the narrowing of the cabin, the aisles are a bit wider. The extra elbow room is welcome!

We boarded on time but there was an issue with the flight plan so we ultimately left about 30 minutes late from LAX. Our taxi was a bit long but nothing unusual from LAX. Once we reached cruising altitude, the seat belt sign was turned off almost right away. Meal service started within about 30 minutes of takeoff. Special diet meals were handed out first followed by the standard dinner service. They started serving from the rear Economy cabin and moved forward to the front economy cabin.

In Economy we were offered beef or chicken options and I opted for the chicken dish. For an economy class meal, I thought the presentation was quite nice. And everything was tasty too! Shortly after dinner trays were passed out, beverage service was offered including wines. I like that they feature New Zealand wines and I opted for a nice Sauvignon Blanc. The pours of wine were nice and generous.

Trays were collected in a prompt manner and the cabin lighting began to shift to red as passengers began to doze off to sleep. Later, the cabin lighting shifted to a calm blue tone. I stayed up for another hour or more to catch up on the latest season of Portlandia. The cabin on the plane was quite cool which I appreciated. I would rather have to use a blanket to warm up than suffer in a hot and steamy cabin. I also loved that the blankets on Air New Zealand were soft, thick and high-quality rather than tissue-thin as some airlines use. I checked out the lavatory which was remarkably clean and well-maintained. After a bit more Portlandia on the IFE, it was time to doze off for a few hours.

After managing to get a reasonable 4 hours of sleep (in Economy!) I watched a bit more Portlandia before it was time for breakfast service to begin. As breakfast service started, the cabin lighting shifted to a warm yellow hue. Since dinner service began in the rear Economy cabin, breakfast service started in the front Economy cabin. We were offered a light fruit or full hot breakfast and of course I opted for the full hot breakfast. Similar to the dinner service, breakfast trays had a decent presentation and everything tasted great. Coffee and tea service followed and I appreciated that coffee was served in a quality mug rather than a paper cup.

Breakfast trays were collected about 20 minutes later and the crew prepared for landing in London. We had to go into a bit of a holding patter on approach in Heathrow but fortunately it only lasted about 15 minutes. After we were cleared for landing, we had a smooth ride and landing into Heathrow. As we had departed LAX late, we arrived about 40 minutes behind schedule in London.

We taxiied to Terminal 2, The Queen’s Terminal, for deplaning and luckily we had a jetway for deplaning. No bus gate. Yay! Even though I enjoyed my near empty row in the back of the plane, it did mean I was one of the last to deplane. Finally as I made it to the jet bridge, the friend staff wished me a good day on the way out.

I have to say I was thoroughly impressed with Air New Zealand Economy product through and through! The crew was genuine, friendly, and attentive at all times. The meals were of good quality and presentation, a notch above your average long-haul economy meal. The enjoyed the ambiance of the cabin mood lighting and the comfort of the seat. If I had to think of one minor negative, it would be the lack of in-flight WiFi onboard. In 2016, this is becoming a more expected amenity. This is likely a lesser known route from Los Angeles to London and if you have the option to fly with Air New Zealand, I highly recommend it. And may I dares say? Yes, this is my new favorite long-haul Economy class product!