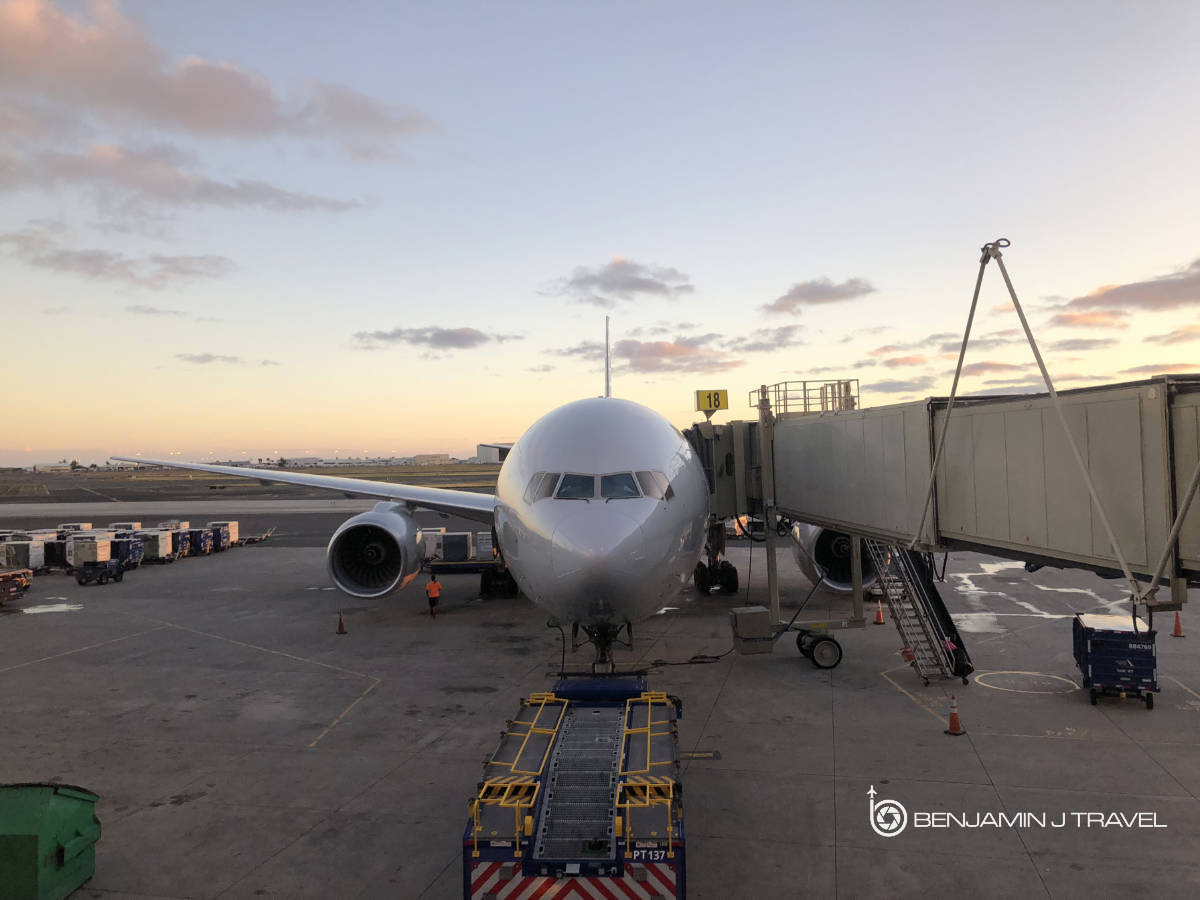 Making our way home from Hawaii, our journey home would be aboard American’s 777-200 from Honolulu to DFW. The 777 is the workhorse between American’s fortress hub in in DFW and Honolulu. American has completed the retrofit of their 777-200s. You can expect a lie-flat seat in Business Class on all of American’s 777s across the fleet.

The Cabin: SeatGuru isn’t exactly accurate on their seat maps American’s 772 so unfortunately a bit difficult to predict which Business Class seat you’ll end up with. But the much improved B/E Aerospace seat is installed on the majority of the 289-seat configuration of the 772. If you really want to get into the details, there’s a thread on FlyerTalk with all the details of the 772 Business Class seats.

The Seat: Fortunately for us, our aircraft was fitted with the newest B/E Aerospace Business Class seat which features 37 Business Class seats in a 1-2-1 configuration. All seats feature direct-aisle access. I was seated in 8A, a window seat, and Chris was seated directly in front of me in 7A.

The Business Class seat shares some similarities to that on American’s 777-300ER. Not any better or worse than the 777-300ER, just different. The seat is overall spacious and there’s lot’s of little storage spaces I found to be handy. The power and USB ports are easy to locate and it’s nice that they are inside a storage bin, perfect for keeping your phone and chargers accessible. In lie-fat mode, the seat offers plenty of space to sprawl out for sleep. Overall, the Business Class seat on the retrofitted 772 is fantastic.

The Amenities: The Bose noise-cancelling headphones are always welcome although they will collect them about an hour before landing. No amenity kit was offered on this flight which I found surprising for an 8 hour flight.

The Food: For dinner, I ordered the Korean Short Ribs which were quite tender and delicious. Beef can be extremely hit or miss in-flight but this has to be one of the best beef dishes I’ve had in the air. The Hawaiian sweet rolls were a nice touch along with the mango ice cream sundae. It’s nice the American has a few special Hawaiian touches on their mainland to Hawaii flights.

The pre-landing breakfast wasn’t much to get excited about. It was an extra-sugary offering of fruit, Chobani yogurt and a scone.

The Service: Overall, the service on this flight was unmemorable. The new was a mix of senior and junior crew members and unfortunately, some of the more senior crew members had poor attitudes.

I do appreciate the consistent, and remarkable improvement in the hard product on flights between DFW and Hawaii. Now that American has a consistent lie flat Business Class product across all of their 777s, there’ s a bit less surprise in what seat you’ll get. However, beware of the occasional 767 to Hawaii although this is more common on flights to Kona or Kahului than Honolulu.