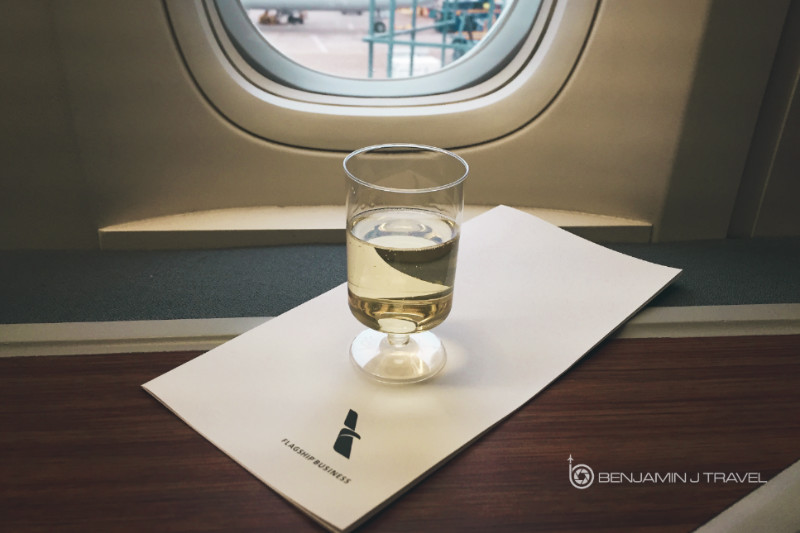 I’ve written extensively about American’s Business Class product on the 777-300ER on the DFW to London route as well other routes like Sydney to Los Angeles.  But I wanted to write-up a “mini review” of my latest journey aboard American Airlines Business Class.

Boarding from Gate D23 (which I despise for it’s compact space), the boarding process started right on time for AA 78 from DFW to London Heathrow. Boarding was slow as there was only one agent scanning boarding passes for this massive aircraft. Once on board however, the crew was cheerful and welcoming.

John and Cheryl were working on my side the cabin and they were both polite and friendly. But John really stood out with spectacular service. Dinner orders were taken during boarding and pre-departure beverages including water, orange juice, and champagne were offered right away.

The dinner service stated with a starter course of a shaved brussels sprouts salad and potato and edamame blinis. The starter was average but nothin fantastic. The presentation was a bit peculiar.  For the main dish, I opted for the duck breast which was served with collard greens and numeric rice. The duck breast had pretty lousy presentation but it actually tasted pretty good. The duck was fairly tender and flavorful. For desert, I opted for the mint ice cream sundae; a reliable favorite in Business Class.

On this particular flight, I saw in 5A which was a first for me. The top complaint about this seat is the proximity to the lavatory which I had no issue with. It’s still space fairly far from the lavatory door so nobody congregates near your seat. However, I did find the proximity to the galley a bit annoying. The noise was non-issue for me but the light was a bit annoying. 5A wouldn’t be my first choice for a seat next time.

The WiFi service on this flight was quick and consistent for nearly the entire flight. I do think American Airlines provides decent international WiFi service but some flights are better than others. I watched a bit of the in-flight movie selection before dozing off for a bit of sleep.

John awoke me about 90 minutes before arrival into London. For breakfast, the meal options were a chicken sausage omelette or fruit and yogurt. I don’t care for airline yogurt so I opted for the heartier omelette. The sausage was tasty but the omelette was a bit too salty. About 45 minutes before landing, all remaining meal and service items were collected along with the Bose headsets.

On this particular flight, the service really stood out. John and Cheryl both did a great job. My glass was never empty: water, coffee, or wine. Plus I appreciated that John asked if I’d like to be awoken for breakfast which you rarely get on U.S. carriers. I was also thanked for my business by at least three separate crew members.

In the end this flight was somewhat mixed in terms of the soft product. The crew service was fantastic but the food could have been better. I think American Airlines tried to get to creative with the starter course and ended up falling flat. But as always, the seat and the hard product in Business Class on the American 777-300ER was fantastic. But all things summed up, it was a positive experience.

American’s 777-300ER Business Class seat is my favorite hard product for crossing the Atlantic. What’s yours? I’d love to hear in the comments below!