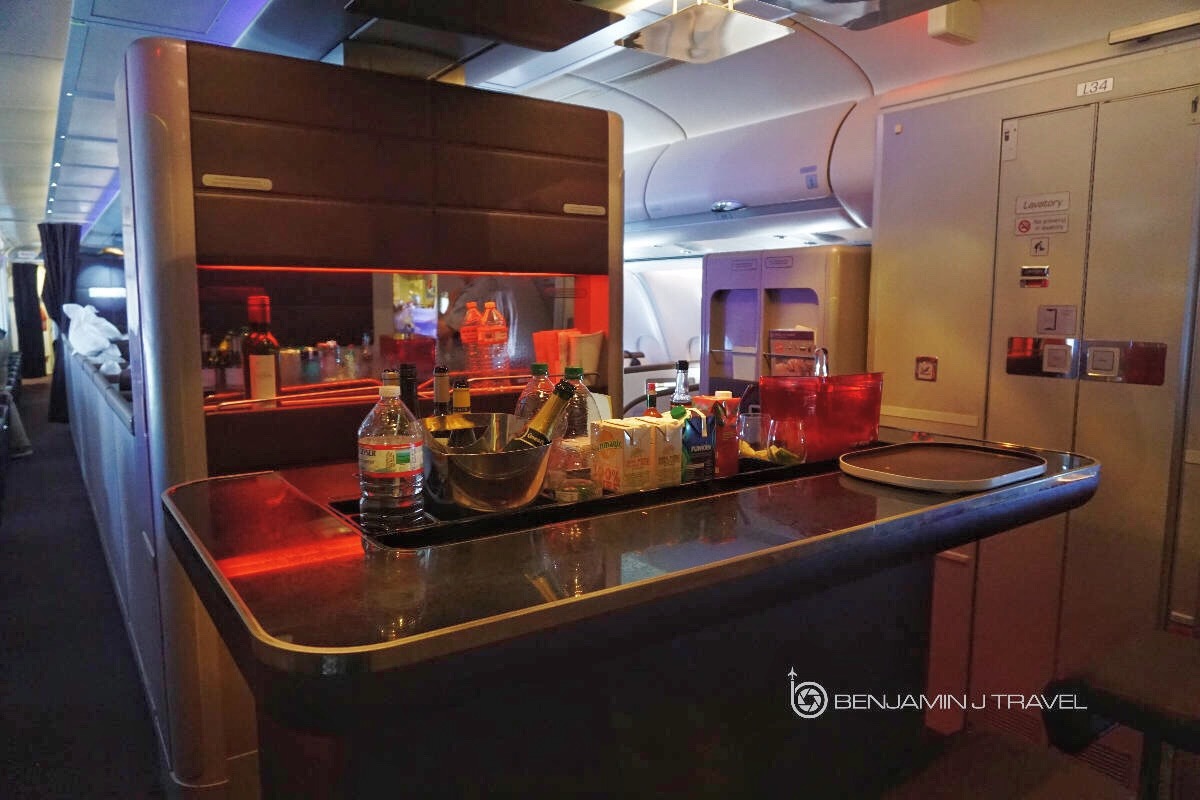 Heading back to to Texas after wrapping up a siblings trip with my sister, Virgin Atlantic A340 Upper Class from London Heathrow to Atlanta would be our transatlantic segment. I had recently flown both Virgin Atlantic Upper Class on the A330 and Virgin Atlantic Premium Economy on the 747 and you should know I’m already a fan of Virgin Atlantic. I have a love-hate relationship with the A340 with it’s roaring four engines. It’s a beautiful aircraft but most airlines haven’t done a great job off maintaining their A340 interiors.

I’d been waiting quite a while to check out the Virgin Atlantic Clubhouse at London Heathrow and I was finally getting my chance! The Upper Class Wing is touted as a lovely amenity and it certainly didn’t let me down! Our driver dropped us off at the door of the Upper Class Wing. The staff greeted us with our boarding passes ready to go. My sister and I were the only two passengers in all of the Upper Class Wing as well as the private security channel. Security was incredibly quick.

About 20 minutes before our scheduled boarding time, we headed towards our boarding gate which was a bit of a walk from the Clubhouse. Departing from Gate 11, our flight board right on time. Security gave me a a hard time about taking photos in the gate area which annoyed me of course but I don’t really have a choice but to comply. The gate areas certainly aren’t the most important photos in my trip reports 🙂 . The Virgin Atlantic staff seemed to even think the security agent was being a bit ridiculous.

The Upper Class cabin is aglow in mood lighting and tones of white, chocolate brown, and taupe.  My sister and I were originally seated in in 14A and 15A. But a few minutes after boarding, one of the flight attendants asked if my sister would move to 13A so a couple who was separated could sit together. Since it really wasn’t really much of a change, my sister was happy to move. The herringbone layout isn’t my favorite layout but it has a few perks, specifically direct aisle access for every seat. On the negative, the seats tend to be narrower and the direction of the seats requires you to crane your neck to look out the window.

Most A340’s aren’t young in age but Virgin Atlantic has kept their cabins on these aircraft in good condition. There was a little bit of wear on in the magazine holder but otherwise the seat was in nice condition. The seats lay completely flat but require both electronic and manual controls to switch between seated and lie-flat mode. Notably, there are no AC or USB outlets on the A340 in Upper Class, only EmPower ports which you don’t see too often these days. The crew can provide you with an adapter if you need to charge your laptop or phone during the flight. Since there is no WiFi on the Virgin Atlantic A340-600, I didn’t need to charge my phone or laptop. There are also EmPower ports in Premium Economy but no power ports in Economy.

Pre-departure beverages were offered, a choice of orange juice or champagne. We pushed back from the gate right one time. Orders for lunch were taken before takeoff as we had a bit of a long taxi before takeoff. Shortly after takeoff, we leveled off at cruising altitude and beverage service was started. Crisps were served along with beverages and I have may have been offered and accepted multiple refills on crisps : ) Following beverage and chips, appetizers were served first and options included green Thai chicken kebabs, butternut squash salad, or tomato basil soup. I opted for the chicken kebabs which were served chilled. I thought the kebabs were fairly tasty.

The lunch main course soon followed and choices including free-range chicken, filet of beef, spinach and ricotta tortellini, or salmon filet. While the beef filet sounded good, I ultimately decided on the salmon. The salmon was quite tasty and the cream sauce complimented it well. Desert followed and I opted for the salted caramel pudding which was quite tasty. I completely indulged and said yes to the cheese and biscuits plate and a small glass of port. Oh and a cup of coffee to top it all off. You only live once, right?

After indulging myself over lunch with food and drinks, I laid my seat down halfway and watched a move on Vera, Virgin Atlantic’s IFE sytems. The IFE system isn’t touchscreen enabled so you must use the remote which helps make the IFE system feel dated. The headphones offered in Upper Class on the A340 are decent but not as impressive as Bose headsets offered on other airlines.

About halfway into the flight, I asked the flight attendant to help make my bed into lie-flat mode which the crew is happy to do. The Upper Class seats require a bit of manual  movement to switch between seated and lie-flat mode. Upper Class passengers are offered full size pillows, a soft mattress pad and a duvet. The bedding is a bit above the quality on American’s 777-300ER Business Class and far above the bedding quality in British Airway’s Club World. I dozed off for a good 2-3 hours and the cabin temperature stayed fairly comfortable. But having individual air vents certainly helped keep me more comfortable.

There was not set lunch service before arrival but rather passengers in Upper Class could order as many small plate entrees throughout the flight on-demand. About 90 minutes before landing, the flight attendants proactively offered the small plate options to Upper Class passengers. I ordered the Chicken Tikka which was pretty tasty. Final drinks were offered as well. About 30 minutes before landing, any final glassware was collected. We were soon on the ground in Atlanta, almost a whole hour early.

At time of post. there are up to two daily Virgin Atlantic operated flights between London and Atlanta, one A330 and one A340 service. Since I’d already experienced A330 Upper Class, I wanted to give the A340 a try, even though it’s an older aircraft. The A340 does have much roomier cabins than the smaller A330. Neither aircraft feature WiFI and both feature manual seat controls. If I were to have the same choice again, I’d go with the A330 due to the more modern cabin with power outlets.

The crew was really friendly and efficient throughout the flight, always proactively offering drinks or snacks. Plus you can always stop by the Upper Class bar at the rear of the cabin! I’m always really pleased with the service on Virgin Atlantic, regardless of class of service. For me, the soft product really made the flight as the seat is fairly mediocre. But I appreciate the nice touches like the in-flight bar, Herschel amenity kit, and comfy bedding offered. For me, when all things are considered, Virgin Atlantic Upper Class is always an enjoyable way to cross the Atlantic!