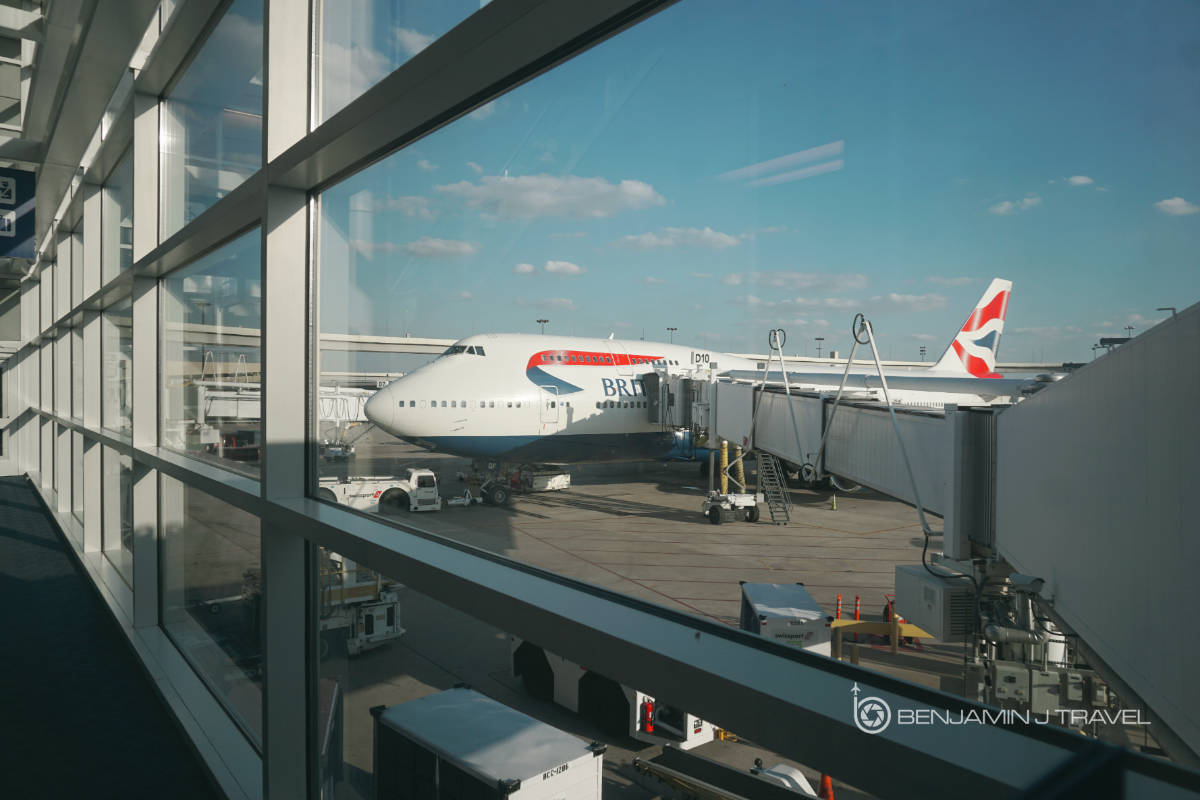 Flying one of my most frequent routes, Dallas to London, I’d be flying aboard the Queen of the Skies aboard a British Airways 747-400 in Economy Class. While I prefer the upper deck on the 747, I snagged an off-peak award with British Airways Avios that I couldn’t pass up for only 16,250 Avios points one-way.

I’ve reviewed the 747-400 Economy Class cabin previously on the reverse route of London to Dallas as well as Boston to London so this will be more of a “mini-review”.

Boarding was a bit delayed and the gate area was quite a mess, The boarding announcements were hard to hear and nearly every passenger rushed the gate at once. It was impossible to get to the Priority line. Once I was able to get through, I boarded through door 2L between the two Business Class cabins. I made my way to the very back of the Economy Class cabin where things were still quite for the time being. Ultimately, this would be a completely full flight.

British Airways refers to the their Economy Class cabin as “World Traveller”. The Economy Class cabin of the 747-400 is mostly in a 3-4-3 configuration but the last three rows are in a 2-4-2 configuration which is ideal for traveling pairs. I had selected 51H as I wanted an aisle seat and like the pair of twin seats rather than a row of three seats. Keep in mind that in these last few rows, there can be a bit of a gap between the window seat and aircraft wall.

We ultimately departed on time from DFW even thigh boarding took quite a whlle. We had a quick taxi and were soon in the air headed to London. Shortly after departure, the cabin supervisor , Claire, came by and introduced herself and thanked me for being a OneWorld Emerald customer. She also brought me a full size water bottle as I friendly gesture. While it seems minors, small gestures like this are appreciated as a frequent flyer.

About 30 minutes after departure, beverage service was started in the Economy Class cabin. This time, Sharon thanked me for being an Emerald customer and recognized me by name. Again, a much appreciated gesture. Sharon went out of her way to check on my satisfaction throughout the flight. I think she brought me a water bottle at least two more times. She certainly kept the mini wine bottles coming throughout the flight; a little extra comfort for being in the back of the plane.

Shortly after the initial beverage service, the in-flight dinner service began. There was a choice between a curry chicken and a cheese pasta. I opted for the chicken curry, which I’d had on my Boston to London flight a few months previously. It was just fine for an Economy Class meal. Plus, I was pretty hungry to start. Service items were collected promptly and the cabin was darkened for passengers to sleep.

I watched a couple of movies as I had trouble drifting to sleep on this flight. There’s no WiFi on the British Airways 747-400s so the IFE system is going to be your primary source of entertainment. Unless of course you bring your own pre-loaded entertainment on your devices. Eventually, I managed to get a two short hours of rest on this flight.

I woke up as the cabin crew was preparing for the pre-landing meal. The meals service began about 90 minutes before our arrival in London. The cabin came through and passed out the breakfast boxes which included a pretzel role stuffed with creamed cheese and a granola bar. It was a high-carb snack and there wasn’t much to rave about,

Soon we were on final approach into London Heathrow; surprisingly with no holding pattern which is typical for the morning rush hour. We had a short taxi on this sunny morning at Heathrow. We arrived slightly ahead of schedule at Terminal 5 and before you know it, I was headed down the jet bridge.

Overall, it was a pretty standard Economy Class flight with British Airways. But the service from the crew was remarkably great and made riding in row 51 just a bit more comfortable. But if I had my choice, I’d much rather be sitting upstairs in Club World.