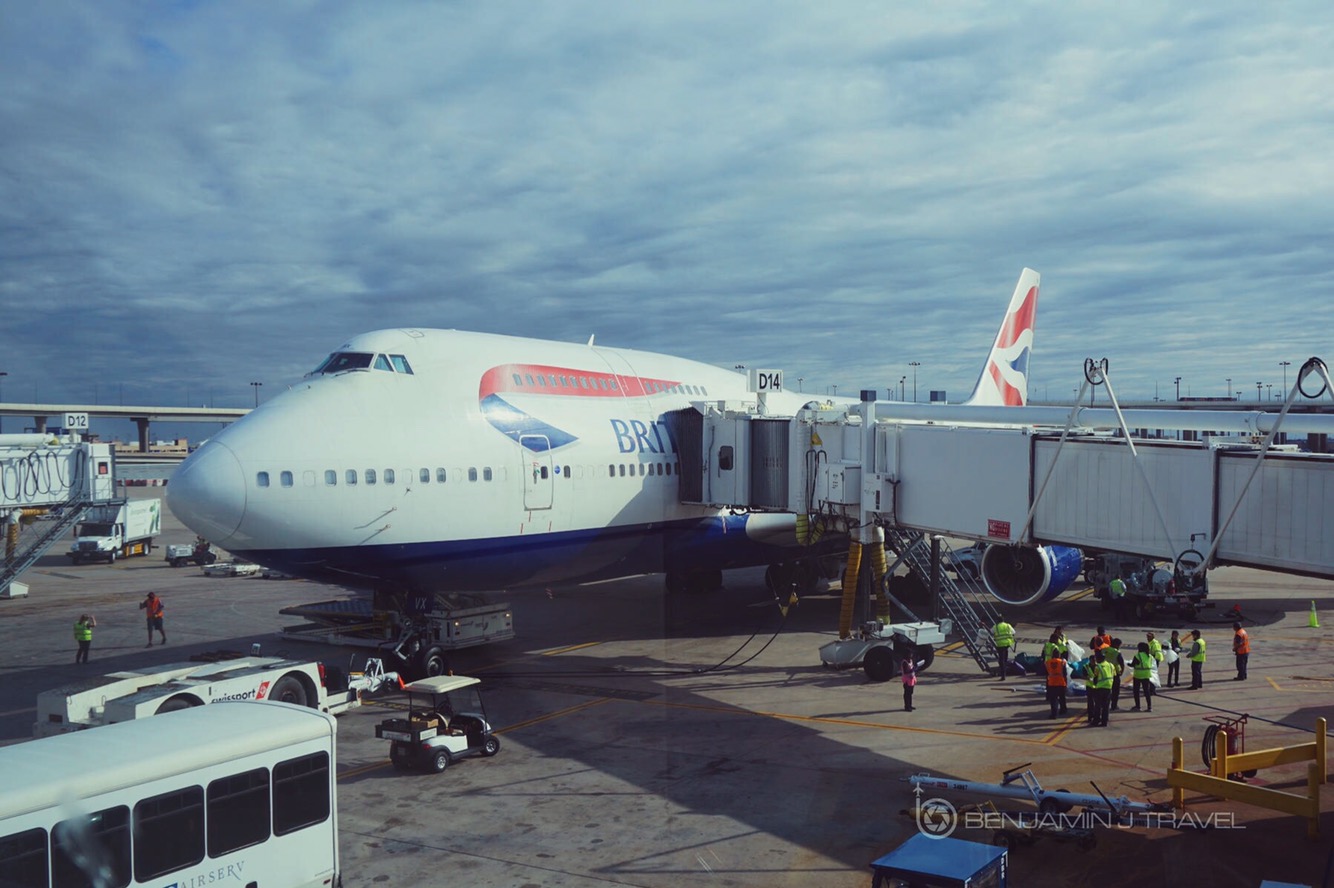 Returning from a weekend in Paris, I decided to select a connection flight back to Dallas to join two friends who headed from London to Dallas. This put me in British Airways 747 Economy Class for the ride home. Even though I enjoy the newer 777-300ER that American Airlines’ flies on this route, I won’t pass up a ride on the Queen of the Skies.

After spending a bit of time with my friend at the Galleries First Lounge in Terminal 5, it was time to make our way to Concourse B of Terminal 5 to our boarding gate. When we arrived at our gate, the boarding area was a bit of a mess. British Airways only have two boarding groups: Priority and Non-Priority. While the gate agents were attempting make clear announcements about the boarding process, it took the mob of passengers a good 5 minutes to form somewhat a a line in each boarding group. Soon, boarding started and we boarded in the Priority group thanks to my OneWorld Emerald Status.

As we boarded at the start of the boarding process, the rear Economy cabin was fairly empty as we took our seats very near the end of the plane. Most of the British Airways 747 Economy Class cabin is in a 3-4-3 configuration but the last few rows are in a 2-3-2 configuration. I had originally selected a seat one of the window pairs in the rear. But since I was joining two friends, a friendly agent in the Galleries First Lounge moved us to a middle row that we’d have all to ourselves.

British Airways’ 747s are not the youngest planes in the sky so their ages shows to an extent. However, there have been a few modest updates like a fairly nice IFE system and USB power ports at every seat in Economy Class. This is contrary to some reports on sites like SeatGuru who state there are no power ports in Economy Class on the 747. Seat pitch is a standard 31″ and the recline is about average. However the seats felt very close to one another so it’s certainly not the most spacious feeling Economy Class cabin.

We pushed back from the gate right on time and were quickly up in the air and bound for Dallas. British AIrways is scheduled to begin rolling out WiFi on select planes this year but as of this writing, the 747s have no WiFi service and will likely never see it installed on these aging planes. Fortunately I had plenty of things to keep me busy on my MacBook with a bit of work and movies to watch.

We pushed back from the gate right on time and were quickly up in the air and bound for Dallas. We had a prompt climb to cruising altitude and the seatbelt sign was turned off as soon as we reached cruising altitude. The crew came on the loudspeaker and made a few announcements before beginning beverage service, The crew on this particular flight was quite jovial and very generous with beverages including alcohol. I was given two mini-bottles of white wine and my friends were each given two gin & tonics. All of these were complimentary.

About an hour into the flight, lunch service began and we were offered a choice between chicken and a pesto pasta. I opted for the pesto pasta which was actually quite tasty even though the photo may not look like much. There was some type of cole slaw on the side but it was awful to me. It doesn’t help that I don’t like cole slaw in general. But overall, for an Economy Class meal, it wasn’t too bad.

I managed to fall asleep before my lunch tray was collected but I easily dozed off for a nice 2.5 hour nap. After my nap, I alternated between a bit of work, a couple shows on my phone, and a movie on the IFE system. I do like British Airways’ IFE system as it’s easy to navigate and the map tracking tool is user-friendly.

About 1.5 hours before landing, a pre-landing snack was served in a “picnic box”. The box included tea sandwiches and scone. It wasn’t and for a snack but I’m always up for a scone with clotted cream and jam. Beverages were also offered along with the snack service. Soon, it was almost time to land and rubbish was collected the and the crew prepared for landing.

When I talk to other flyers, they often moan about British Airways. But I have to say my overall experience with British Airways has consistently been more positive than negative. Even though we were stuck in the back of the Economy cabin, we had a pleasant flight and the crew was very friendly and polite. And of course, I’ll keep flying on the 747 as long as these birds are still around!