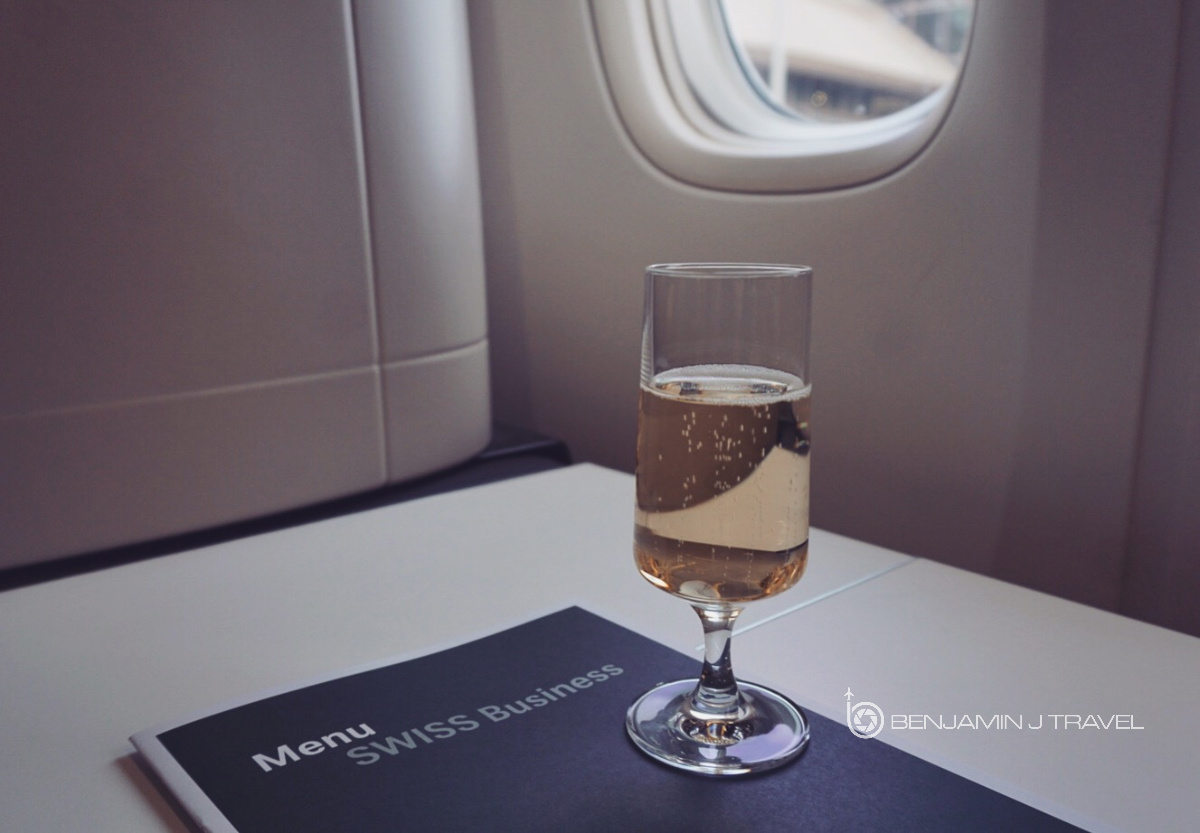 Making my way to the the Cote d’Azur for a week long holiday, my outbound journey would be in Swiss 777-300ER Business Class. I booked an award journey on Star Alliance carriers via Aeroplan, Air Canada’s reward program. Aeroplan represents a great value for transatlantic premium cabin bookings with roundtrip Business Class bookings from North America to Western Europe for 110,000 Aeroplan miles.

After spending the day in Los Angeles, I arrived at the Tom Bradley International Terminal (TBIT) at LAX about three hours before departure. Swiss does not participate in TSA PreCheck so I was resigned to standard security screening.  I’m a bit spoiled utilizing TSA PreCheck nearly every time at US airports so having to use standard screening, especially at TBIT, is frustrating. TBIT has notoriously slow, long lines for security screening.

Our departure time was scheduled for 7:15 pm and boarding was scheduled for 6:45 pm but I headed to the gate about 6:30 pm. We would be departing from Gate 130 in TBIT and the boarding process was overall very orderly. Economy class passengers were lined up in two lines to the right side of the boarding gate, depending on your assigned seating row. I was hoping to be one of the first Business Class passengers on board to get some empty cabin photos but there were several large families ahead of me.

Soon boarding began and after my boarding pass was checked by three different gate agents on my way down the jet bridge, I boarding through door 2L. The crew was friendly and welcoming as I boarded. The Business Class cabin on Swiss’ 777-300ERs are in a staggered  layout with rows alternating in a 1-2-2, and 2-2-1 layout. Not all seats feature direct aisle access which is disappointing for a brand new aircraft product. There is a smaller Business Class cabin directly behind First Class and then the larger main Business Class cabin, separated by the galley.

I was lucky to snag seat 10K, one of the “throne seats” on the right window side of the aircraft in the main Business Class cabin. At booking, this seat would have cost 199 CHF to reserve as a non-Senator member. But during the check-in window, this seat became available at no charge. The throne seat affords a bit extra privacy and a window seat without having to climb over your neighbor.

The throne seat offers the most privacy in Business Class. There are two very large arm rest areas on each side of the seat. While there are a few storage cubbies but it’d be nice if there was a bit more generous storage for the size seat. There were two reading lights on the left hand side of the seat that can be adjusted. The seat is finished in tasteful finishes in typical Swiss fashion. The IFE Screen is quite nice in Swiss Business Class. The IFE system had a great selection of entertainment and the controls were very user-friendly. There are no individual air vents in Business Class.

An amenity city called the “Modular Kit” was offered on the seat along with the Business Class menu. Coat hangers were placed at each seat and corresponded to your seat number. Pre-departure beverages were offered with a choice of champagne, orange juice, or water. I of course indulged in a glass of champagne. Boarding took quite some time on this flight. There were a lot of families in Business Class on this flight and many passengers were asked to swap seats to accommodate families to be seated together. Ultimately we pushed back from the gate about 20 minutes late.

Our taxi was very quick at LAX and soon we were in the air. We had a beautiful view of the Malibu coastline just as the sun was setting. We soon reached our cruising altitude and the crew came through the Business Class cabin to take our orders for dinner. For my starter, I selected the prosciutto with melon, For my main entree, I opted for the beef filet which the flight attendant said was a great choice. I’ve read that Swiss cooks beef better than other airlines so I went for it.

The starter course consistent of the prosciutto starter with melon, side green salad, cheese plate, and bread. Everything was delicious and fresh. The melon paired really well with the prosciutto. Dishes were collected shortly after I finished the starter course and the crew was very attentive with refilling drinks.

I had a glass of each of of the red wines offered which included a Swiss Pinor Noir, French Cru Bourgeois, and California Zinfandel. The Swiss Pinor Noir Classic was my clear favorite but sadly after one glass, they ran out which was disappointing.The main course soon followed and I wasn’t disappointed one bit. The filet came out medium well which isn’t my preferred temperature but expected for an in-flight meal. Even so, it was quite tasty and tender. The accompanying vegetables were tender and delicious.

Trays were collected promptly and coffee and desert were offered after dinner. I ordered an Americano and the tiramisu cheesecake with raspberry. Everything was fantastic. The service throughout the meal service was professional and attentive but not necessarily warm. The service reminded me a bit of my latest Lufthansa flight in Business Class. All meal and service items were collected in an efficient manner without feeling rushed. After all meal service was complete, the signature Swiss chocolates were offered in Business Class.

Shortly after my final dishes were collected, I made my seat into lie flat mode to prepare for some sleep. It’s disappointing that no mattress pad was offered; only a pillow and a blanket. The pillow was acceptable but the blanket was not as luxurious as I’d expect on Swiss. It was similar to the plain blanket you’d find in Club World on British Airways.

The cabin temperatures was tad warm but not overly uncomfortable. I slept fairly solid for almost six hours, waking occasionally due to the warm temperature. I really wish every airline would offer individual air vents; it makes cabin comfort so much easier. Swiss’ 777-300ERs feature WiFi access. The WiFi was a bit expensive at 39 CHF for 100 MB and I didn’t purchase any WiFI access.

I didn’t wake up until we were passing over Paris and about 40 minutes left in the flight. Breakfast service was already complete and sadly the crew couldn’t offer me anything. I do wish the crew would have woken me up for breakfast so I could have experienced it. Sadly, the crew was in a rush to prepare the cabin for landing so there wasn’t much I could do.

Soon we made our final approach into Zurich with some fantastic views of the city. And even though we departed LAX late, we arrived into Zurich about 20 minutes early. We were quickly at our gate and deplaned extremely quickly. The crew thanked passengers on our way out to the jet bridge as we deplaned into Terminal E. Transit at Zurich Airport was painless and smooth as my connecting flight to Nice would depart from Terminal A.

All things added up, I’d say my experience wish Swiss 777-300ER Business class was positive with a few notable dislikes. On the positive side, I enjoyed the private throne seat, the crew was professional, and the food was fantastic. Of dislike, the WiFi was expensive, the cabin layout is dated with the lack of all-aisle-access and I was annoyed the crew didn’t wake me for breakfast. But I’ll let that slide considering some passengers get very angry if you wake them up for meals.

I’ve read plenty of other reviews on Swiss’ Business Class seats on the 777-300ER and they are very mixed. But my overall impression was good in the end. I’d consider most of my dislikes to be minor and while the crew was all about business, they were efficient, attentive, and professional. For 55,000 Aeroplan miles and a nearly 11 hour flight, Swiss 777-300ER Business Class was an overall good value.