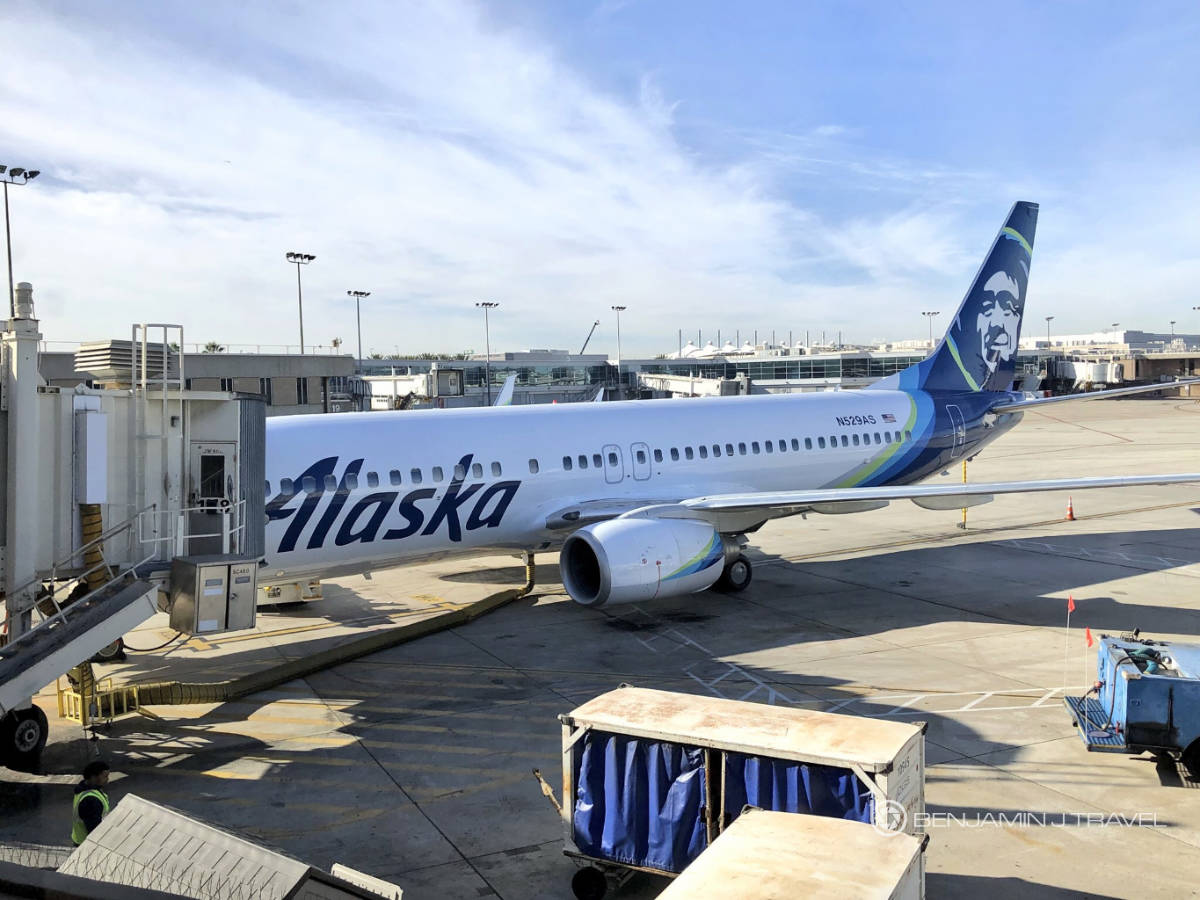 Making the journey to Hawaii for a 10 day holiday, our final outbound leg would be aboard Alaska Airlines from San Diego to Honolulu. This was an award booking  with American Airlines AAdvantage miles with the first segment form DFW to San Diego on American Airlines. We’d been upgraded thanks to my Executive Platinum status on the first leg but we wouldn’t be eligible for an upgrade not the Alaska operated flight.

On our connection in San Diego, we had to exit security to transit from Terminal 2 to Terminal 1. TSA PreCheck was closed in Terminal 1 but we were able to use the Priority boarding lane which sped things up a tad bit. I still had to take out all my toiletries and laptop. But hey, at least I got to keep my shoes on! Terminal 1 was a congested mess so I was eager to board our flight after waiting for an hour in the gate area. Fortunately boarding began right on time and we were one of the first passengers on board.

Alaska currently has two configurations on their 737-800s, one with First and Economy class and the other also featuring Premium Class. Our aircraft was the latter with Premium Class seating. I wasn’t in the mood to spend $99 per person to upgrade to Premium Class. We were happy with our complimentary exit row seats thanks to my Executive Platinum status with American. Alaska and American have slashed their reciprocal elite benefits but a few still remain intact, like preferred seating section at no extra charge.

Chris and I were seated in adjacent aisle seats in an exit row: 17C and 17D. Standard Economy Class pitch is 31-32 inches on Alaska but we had a bit extra thanks to the emergency exits. Note that recline can be a bit limited in the exit row but it wasn’t incredibly noticeable to me. Legroom was plentiful but I felt the under seat storage in front of me what a bit tight. There are AC power outlets every aboard the 737-800.

We pushed back from the gate a few minutes early and lined up for departure before climbing out over Mission Bay. There is GoGo WiFi on board on most Alaska aircraft including ours. However, the WiFi only lasted for about 20 minutes as we reached the open ocean. There are no IFE screens on Alaska’s 737-800s but does feature Alaska Beyond, their free streaming service for your own device. Alaska will also allow you to rent a pre-loaded tablet for watching movies and TV shows. For our flight, the price was $10 for the duration of the flight. I did use the streaming service on my iPhone but the service was buggy and stopped working a few hours into the flight.

About 45 minutes into the flight, the initial beverage and snack service began. Due to the longer duration of the flights to Hawaii, hot meal offerings are available for purchase with Alaska. I purchased one of the hot entrees for $7, the curry chicken which was quite good. Complimentary beverages and Biscoff cookies were passed out as well. About halfway into the flight, another beverage service was offered in the main cabin.

About an hour before arrival in Honolulu, a final snack and beverage service was offered. Complimentary Mai Tai cocktails were offered during this pre-landing service. It’s nice to see airlines bring back small amenities that have been previously cut. The Mai Tais were served from a pre-mixed plastic bottle so don’t expect fancy mixology 🙂 I also purchased a fruit and cheese snack pack for $7.50 as I was quite hungry. Unfortunately, the fruit and cheese plate was far from fresh and it wasn’t very good.

The crew throughout the flight was extremely professional and courteous which was much appreciated. I’ve always had pleasant crews with Alaska and appreciate their consistent courtesy.

The only major inconvenience on this flight was the Alaska Beyond entertainment going in and out on the flight. Depending on how many movies you watch on a flight, this could be quite frustrating. The fruit and cheese snack was also disappointing.

But flaws aside, I was very pleased with the professional and polite crew, the hot meal I purchased, and the generous legroom in the exit row. I’ve come accustomed to consistent experience with Alaska and sometimes wish they flew more routes where I need to go. And while I prefer a wide body aircraft for flights to Hawaii, the Alaska 737 from San Diego to Honolulu provided an overall good passenger experience.

I typically prefer to use my miles on premium cabin redemptions but considering flights to Hawaii are consistently very expensive, I’d say we got great value from my AAdvantage points.

What are your experience flying the 737 to Hawaii with Alaska or other carriers? Share your thoughts in the comments below.