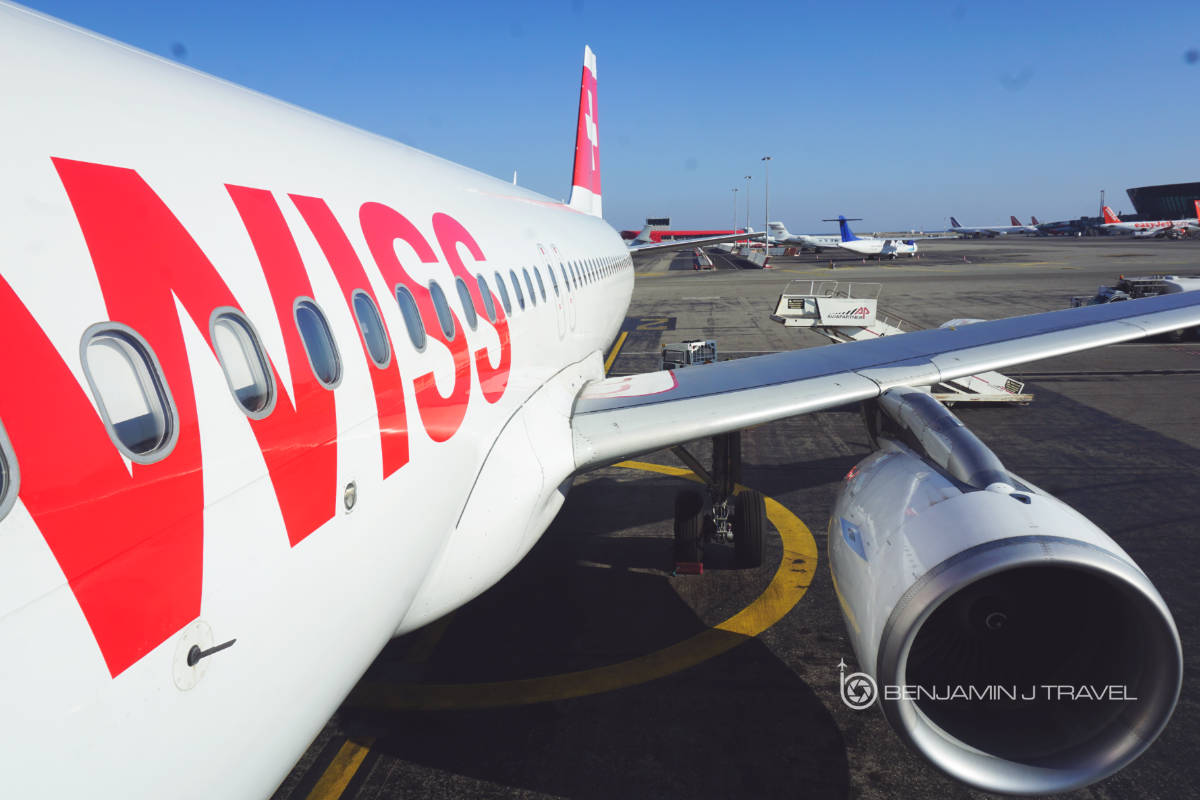 Making my way to Nice for a week in Provence, my the final leg of my outbound journey would be in Swiss A320 Business Class. After a nice journey aboard Swiss’ 777-300ER in Business Class from Los Angeles to Zurich, I was looking forward to another Swiss flight. My connection in Zurich was just under two hours so I spent most of my time in the SWISS Business Lounge in Terminal A.

About 15 minutes before scheduled boarding time, I headed over to Terminal A and to our boarding gate: A81. Boarding started right on time and I boarded with the Priority group for Hon Circle, Miles & More Senator, Business Class, Miles & More Frequent Traveller, and Star Alliance Gold passengers. Boarding was orderly and I was the first passenger to board so I had a chance to snap a couple of quick photos of the cabin.

I was seated in Seat 3F, the left-hand side window seat. Business Class was less than half full and I had the whole row to myself. Boarding was prompt and efficient and were soon ready for an on-time departure. Shortly before the aircraft door was closed before departure, the crew came through Business Class and offered packaged towelettes and bottle water. Hot towels would not be offered on this flight. Soon, we pushed back and had a short taxi before takeoff. We had a smooth, scenic climb out of Zurich.

As soon as we reached cruising altitude, the Business Class curtain was close and cabin service began. The crew started from the rear of the cabin and worked forward, We were served a light lunch for this short 90 minute flight. To be honest, I did’t know exactly what I was eating as there were no menus distributed and there was only one meal option. It appeared there was an egg quiche, a pate with fish eggs, and a tiramisu style dessert. The food was tasty but it also helped that I was quite hungry. Drinks were offered and I obliged a glass (or two) of champagne.

Drink refills were offered multiple times on this short flight and the crew was friendly, polite and efficient. About 20 minutes before landing, trays were collected and the traditional Swiss chocolates were offered. Glassware was collected about 5 minutes before landing. Our final approach offered a lovely view of the Nice and the surrounding Côte d’Azur. We arrived in Nice right on time but unfortunately our gate was not yet available. We were shifted to a bus gate which ultimately delayed our deplaning by about 15 minutes.

Overall, Swiss A320 Business Class was a nice experience. While European Business Class doesn’t offer the roomy seats you’d find in North America, the soft product makes up for it. Swiss flights consistently offer a high level of professionalism and polite crews. Not a bad way to find your way to Provence!

What are your favorite intra-Europe Business Class carriers? I’d love to hear your thoughts in the comments below.