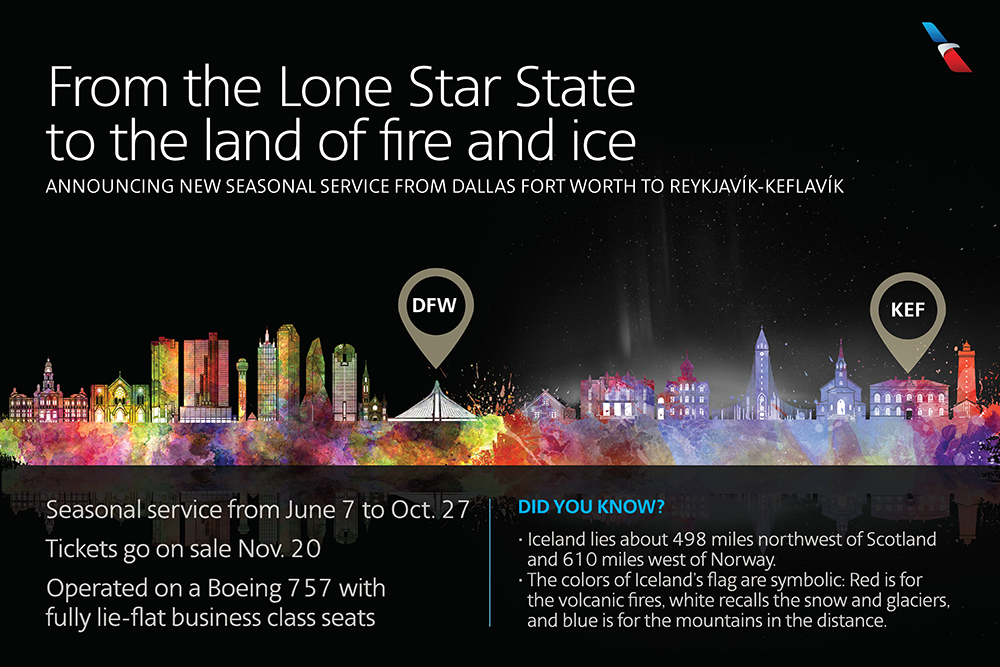 Well I’m calling this one a Tuesday morning surprise! American Airlines announced this morning that they are launching a new route from DFW to Iceland starting in June 2018. My good friend Ben and fellow avgeek sent me a note this morning to give me a heads up.

This seasonal service brings the total count to three carriers that will offer service from Dallas Fort Worth to Iceland’s capital, Reykjavik. WOW Air and Icelandair announced their intentions to serve DFW in the last few months. Being the 4th largest metro area in the United States, DFW has been shortchanged on service to Iceland since it become such a popular destination. To book an itinerary, it required quirky connections or two separate tickets to be purchased.

The Boeing 757-200 will be in a transatlantic configuration with Business Class featuring lie-flat seats, Casper bedding and Cole Haan amenity kits.

I’m quite excited to see this announcement from American Airlines. While Iceland is becoming incredibly popular (and crowded), I still want to visit soon. And perhaps this route will finally convince me to go ahead an book it. I’d rather fly lie-lat than a cramped WOW Air seat anyway. One-way Business Class redemptions will start at 57,500 AAdvantage miles.

What about you? Is this a route you’re excited to see it Iceland? Share your thoughts in the comments below.