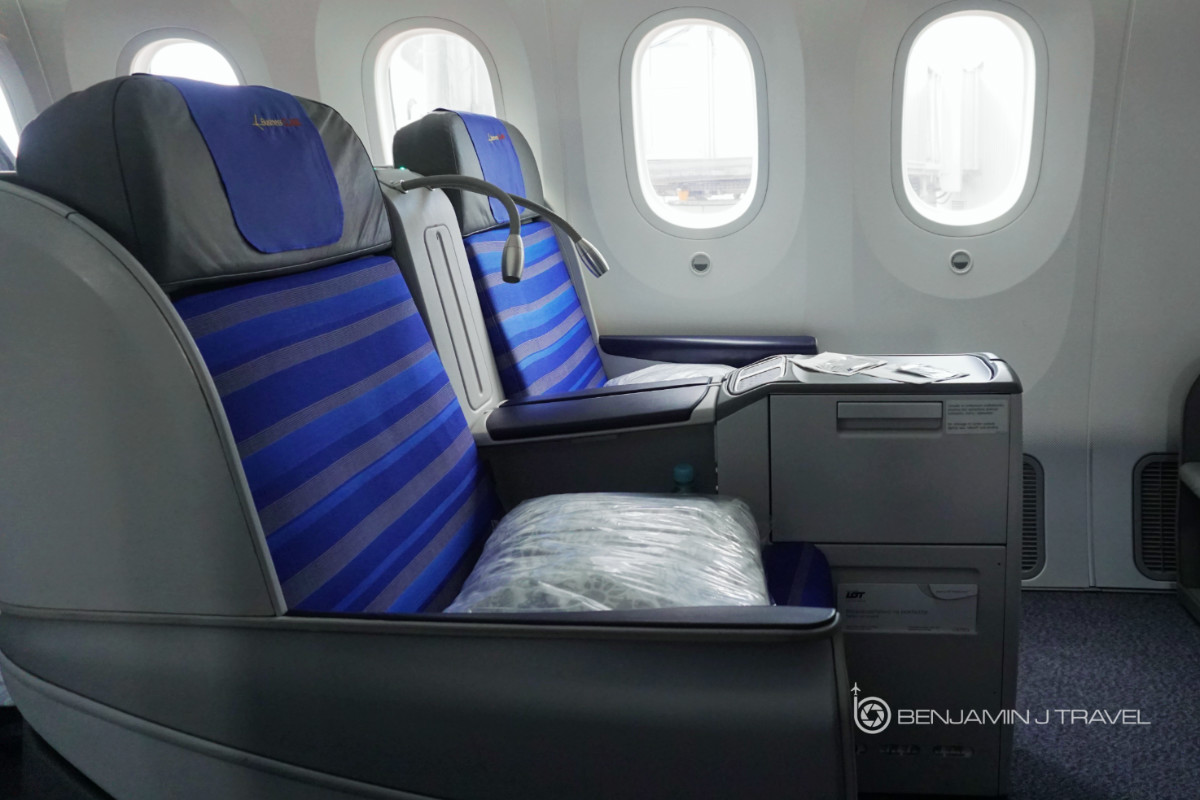 Making my way from Warsaw to Chicago, LOT Polish Business Class on the 787 would be my ride across the Atlantic. After a nice flight from Brussels to Warsaw on LOT Polish, I was looking forward to my firs long-haul flight with LOT Polish. I’d spent some time in the Polonez and Bolero Business Class lounges before heading to the boarding gate. The boarding process was a bit delayed and boarding commenced about 20 minutes late after the scheduled time.

I was seated in the front bulkhead row in seat 1C, an aisle seat in the center section. At check-in, this was only one of two seats available for selection but after boarding, there ended up being a few empty seats in Business Class, including the seat next to me. I took my seat and quickly settled in my bag and took a few quick photos. There are both universal AC and USB power ports at every seat. There is no WiFi service on LOT Polish’s 787 Dreamliners.

Right as I took my seat, the crew came around and offered pre-departure beverages which, a choice of champagne or water. As boarding neared completion, an amuse bouche was offered in Business Class which wasn’t listed on the menu. It was a small bite of mayonnaise, salmon, and zucchini. Newspapers and magazines were also offered just before we pushed back from the gate.

We pushed back from the gate almost 30 minutes late to await a few connecting passengers who were delayed from their previous flight. I had a scheduled tight connection in Chicago (of my own doing) so I wasn’t too thrilled. Warsaw is a rather small airport so our taxi was prompt and we were soon in the air on the way to Chicago.

Once we were in the air, the in-flight service began with beverages offered and warmed nuts passed out in Business Class. The crew came around and took orders for lunch service and we were offered an option for the starter and main courses. I opted for the carrot and sweet potato soup which was served with a mixed green salad.

For the main course, I went with the roasted turkey in white wine sauce. Soon, the serving cart was rolled out with the salads and the soup starter was brought out from the galley individually. The soup was sweet and flavorful. The mixed green salad was nice and fresh. Dishes were collected promptly and the main course immediately followed.

I had ordered a glass of Riesling as it was supposed to pair well with the turkey. Riesling isn’t usually on my radar but I thought I’d go for it. The presentation of the main entree was quite nice and it also tasted great. I’d had so much food that I could barely finish my meal. Following the main course, dishes were collected and an ornate dessert cart offering was rolled out. There were quite a few options for desserts along with various liqueurs. I was quite full so I stuck with a small ice cream sundae with raspberries.

I’d had quite a long travel day so after a robust meal, I was ready for a nice long nap. I made my seat into lie-flat mode and pulled out the pillow and blanket that were already at my seat. As I began to make my bed, a crew member came by and brought me a mattress pad for extra comfort which I appreciated. The seat is quite comfortable in lie-flat mode with plenty of width. The seat could use a bit more privacy but since I had nobody sitting next to me, it wasn’t bad.

I dozed off to sleep and slept for a solid 6 hours on the way to Chicago. I was quite tired. Mid-flight snacks were available but I didn’t sample anything as I slept most of the flight. The lavatories were very clean and spacious in Business Class.

About 2 hours before landing, the crew began to prepare the pre-landing meal which I supposed one could consider dinner. The pre-landing meal was quite robust with two starter dishes: duck breast and smoked salmon. The main course was a spinach ravioli with marscapone and tomatoes. Everything was really delicious and I’d say this was my favorite meal of the flight. A mixed fruit salad was served as well for desert.

We had plenty of time to finish the meal in a leisurely manner as the meal service was complete about an hour before landing. Any final service items were collected and the cabin was prepared for landing. I started watching a movie about an hour before landing but about 30 minutes out of Chicago I had to store the IFE screen. We had a long approach into Chicago and even circled around the city for about 20 minutes.

Soon, we were on the ground in Chicago. We had a very long taxi before reaching out gate which only cut into my already short connection at Chicago O’Hare. Once arriving at our gate at O’Hare’s Terminal 5, we deplaned via door 2L and Business Class was allowed to deplane first. The crew thanked everyone for their business on the way out the door.

Overall, I really enjoyed my flight in LOT Polish Business Class on the 787. While the seat layout doesn’t offer direct-aisle access at every seat, LOT Polish offers a very spacious and comfortable Business Class seat. The crew was extremely attentive throughout the flight and the good was fantastic. While LOT Polish isn’t an airline you hear a lot about, I thought the food presentation was top notch. I’d be eager to fly LOT Polish in Business Class again. I’m excited about all their new transatlantic routes being added very soon to Budapest and the U.S. west coast.