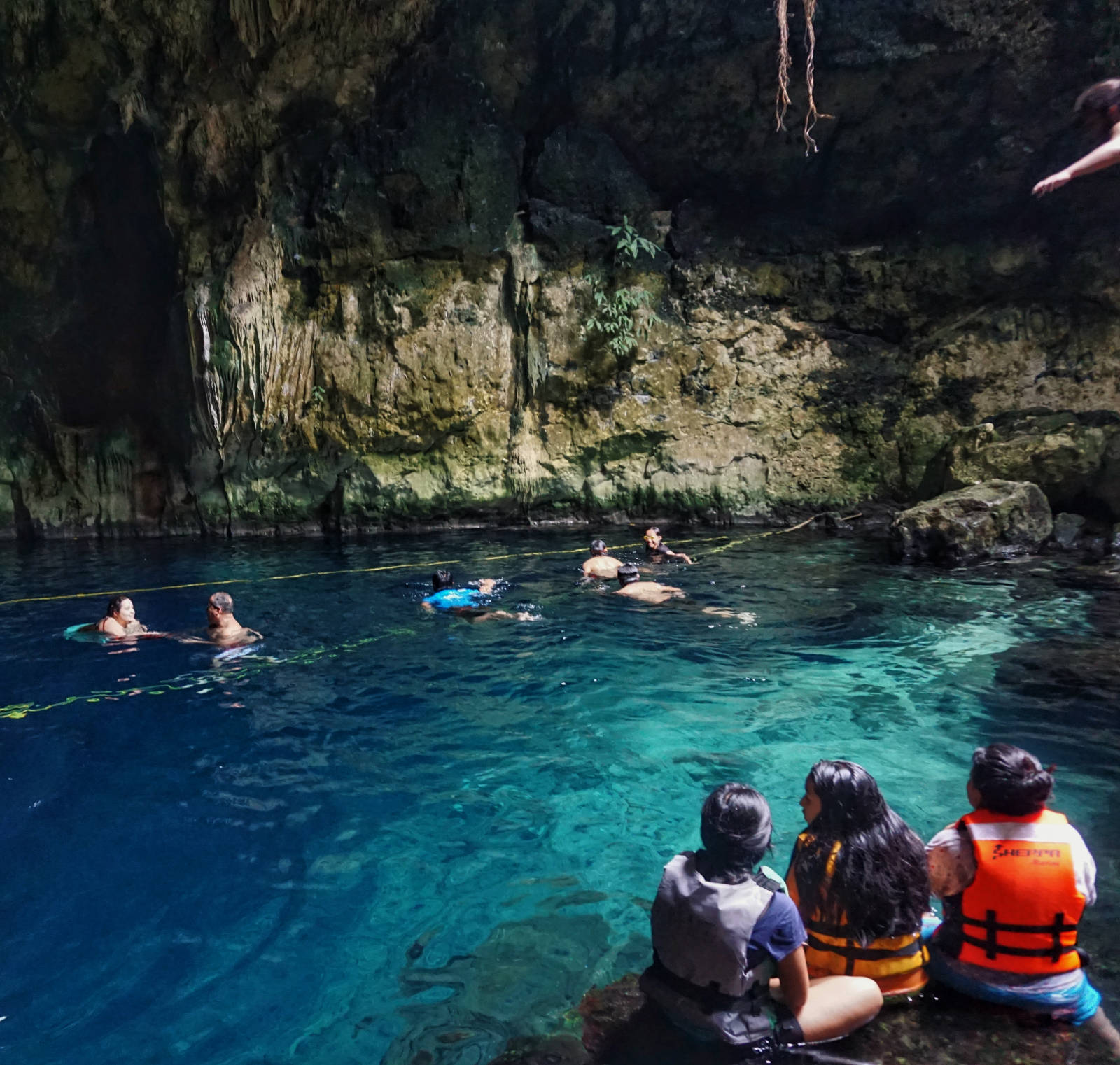 This is part one of a three part series highlighting Mérida, Mexico and the surrounding Yucatan region. In part two, I’ll focus on the nearby villages of Cuzama, Chunkanán, and the well known “Los 3” Cenotes.

In the third and final post in this series, I’ll cover exploring Cuzama and “Los 3” cenotes, a fantastic day trip from Mérida. On our third day staying in Mérida, we took a small group guided tour to the village of Cuzama and Chunkanán,which is home to the neaby “Los 3” Cenotes. Our driver picked us up from our hotel around 9 AM for the 45 minute drive to Cuzama. Like our tour to Uxmal and Kabah the previous day, our tour guide was bilingual and Chris and I were the only ones who spoke English. I was happen for another day of Spanish immersion lessons!

Cuzama is the more well known town of Los 3 Cenotes although the hamlet of Chunkanán is actually where we started out trek to the cenotes. Our guide parked the van and instructed us to wait for our turn to board the carts. Half the adventure to the cenotes is the horse-drawn cart ride! There are a few vendors offering to rent life vests to use in the cenotes. These are optional but recommended if you are not a strong swimmer due to the minerals in the water. It was only 5 pesos to rent a life vest. I’m a strong swimmer and I skipped the life vest. I would recommend one for the kiddos.

Within a few minutes, we were aboard the horse carts, bound for the cenotes. The horse drawn carriages are quick but bumpy ride. Be prepared to hold on! Bolonchojol Cenote was a first stop, which is the most challenging to access and by far the most difficult to access. I did climb down for a quick peek but it was difficult to photograph. Most of our group declined to enter this cenote. Chacsinicche Cenote was our second stop which is much easier to access. It’s a wide, underground cenote with crisp clear waters. We all entered the caverns but none of us got in the water.

Our last stop along the cart route was the Chelentun Cenote, the most picturesque, and only partially open cenote among the three cenotes. Upon descending the narrow, but manageable wooden stairs, you find yourself on the bank of clear, cyan-colored waters. There were about 25 people in the cenote at one point and it did feel a tad crowded but there’s still plenty of room to swim, walk along the rocks, and snap some photos. We all took some time to get in the water and explore. Our guide gave us a full hour to take our time exploring this cenote. The Chelentun Cenote is the most postcard-worthy cenote on this tour and is the one you’ll usually find featured in advertisements.

Pro Tip: Be sure to bring insect repellent with you on the journey to the cenotes The mosquitoes, gnats, and horseflies are very lively near the cenotes. A bit from a horsefly is not fun!

After wrapping up our time at the last cenote, we loaded up into the horse-drawn carts one last time for the ride back to the village of Chunkanán. Once back in the village, we were taken to a nearby restaurant for lunch. The restaurant was very simple and the food was decent. As expected, we had Yucatecan cuisine. There was also an in-house cat that joined us for our meal under the table.

After lunch wrapped up, we were back in van for the ride back to Mérida for the next 45 minutes. I was pretty beat so I took another nap on the way to the hotel. We arrived back at the hotel around 3:30 PM. We thanked our driver for the tour and once again returned to the pool at our hotel.

We had a fun day out at “Los 3” Cenotes and exploring the villages around Cuzama. The horse drawn carts were definitely memorable. If you only have time for one excursion out of Mérida, I would pick to tour the Uxmal and Kabah ruins. But, if you can squeeze in two excursions outside the city, definitely try and make time for the cenotes!